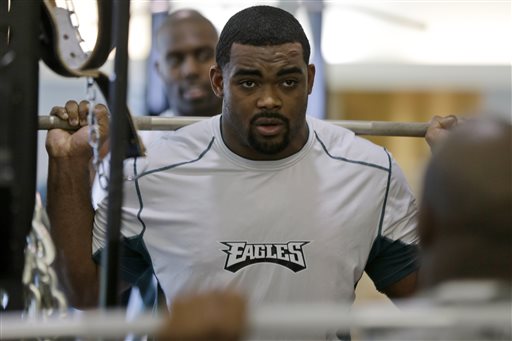 Brandon Graham led the Eagles in sacks in 2012 and has matched the output of Jason Pierre-Paul since the start of 2012, but still doesn't believe he'll ever silence his critics.

Of course that is because the Seahawks All-Pro safety who is continuing to improve game-by-game and year-by-year along with the Giants pass rushing phenom were both on the board when the Eagles moved up to the 13th pick in the 2010 NFL draft to select Graham out of the University of Michigan in a move that even at the time was viewed as a 'reach' pick.

Graham though is coming off a game against the Arizona Cardinals on Sunday where he showed glimpses of being the kind of disruptive pass rusher the Eagles envisioned back in 2010.

It wasn't until week 10 last season that Graham saw steady playing time, after being miscast in Jim Washburn's wide-nine front, but once he saw the field the University of Michigan product made the most of his snaps, finishing the season with a team-leading 5.5 sacks including four in the season's final five games.

This season Graham is paired along with Trent Cole as linebackers in defensive coordinator Bill Davis' 3-4 alignment. Since the start of last season Graham has matched Pierre-Paul's output of 8.5 sacks since the beginning of 2012.

It's taken awhile, but it seems Graham may finally be starting to earn his keep after enduring a knee injury as a rookie that hindered his second-season.

Still, in spite of his rapid ascent over the past two seasons, Graham doesn't expect his critics to go anywhere anytime soon.

"I don't think I'll ever silence [the critics] until I get a couple of Pro Bowls under my belt," Graham admitted Wednesday speaking with reporters at his Novacare Complex locker. "Guys like Earl Thomas and Jason Pierre-Paul have been there before me.

"I hear that all the time. It's cool, I'm embracing it and as long as I keep working, I know one day I'm going to be that guy that I know I can be."

So could Graham possibly reach that level this season?

"It could be happening, right now. You never know."

Graham’s two sacks against the Cards marked the second multi-sack game of his career. Last year, he had 2½ against the Cincinnati Bengals along with 10 tackles in a December 13th game at Lincoln Financial Field.

Graham's critics may always point to the players the Eagles passed over to select him and the 25-year old may never escape from that metaphorical shadow. However, the fact that his production is increasing cannot be debated or ignored

Not even by Graham's harshest critics.