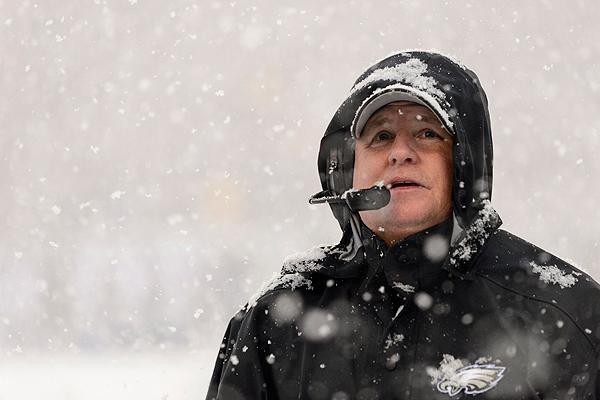 The Snow Bowl at Lincoln Financial Field showed the character of the Eagles and Chip Kelly's ability to adjust to any conditions.

Chip Kelly had never taken part in a game like Sunday's Eagles victory over the Detroit Lions in the snow globe known as Lincoln Financial Field.

"I played in some games with snow in New Hampshire," Kelly said after the Eagles 34-20 win over the Lions. "But nothing quite like this."

The snow rolled in beginning at around 11am Sunday morning, a full four hours before it was expected to hit the Philadelphia area and it undoubtedly buried Kelly's game plan of how to attack the Lions.

In the first half the Eagles offense struggled to build or maintain any semblance of momentum. At the start of the third quarter Nick Foles mustered just 35 passing yards and the offense sputtered, appearing as if the Eagles – and not the Lions – were the team that plays at least nine games a year indoors, shielded from the elements that wreaked havoc on Sunday's contest.

“At times during a game, the crap is gonna hit the fan,” head coach Chip Kelly said. “You show up here in the morning and our weather report was it wasn’t going to snow until halftime. It didn’t out very well, but we both had the same field.”

So, Kelly in the midst of a blizzard ditched his original game plan and as the visibility improved, the Eagles offense found it's footing on a field that had been covered by roughly four inches of new fallen snow.

Suddenly the offensive line opened holes that allowed LeSean McCoy to set a franchise record for rushing yards in a single game with 217. Foles steadied in the latter stages, finishing with 179 passing yards, one touchdown pass, one rushing touchdown and his first interception of the season.

It wasn't nearly as pretty as the scenery the snow created at Lincoln Financial Field but by day's end Kelly and the Eagles notched their fifth straight victory for the first time since 2009 and now sit alone atop the NFC East division standings, pending the outcome of the Dallas Cowboys game against the Chicago Bears tonight at Soldier Field.

The first-year head coach deserves plenty of praise for his adjustments and how he handled this team on a day that was filled with adversity.

Beyond the fact that the snow made moving the football nearly impossible for this team in the early going, Detroit sprung out to a 14-0 lead and seemed to be in total control.

Yet, at halftime, with the Eagles trailing 8-0 on an afternoon where the kicking game was nonexistent, the Eagles didn't quit as they likely would have in the not-so-distant past. Just as the character of this team is shining through as the games become more meaningful as the season wears along, rather then pack up the tent and go home on Sunday, this team clung together and notched a statement victory against a fellow division leader.

“I think it showed everybody what we know about them," Kelly said of how this team's character came shining through. "I don't think this group gives up.  I think they've got way too much invested, and I think the more you have invested in something it's a lot more difficult to quit.

"It's an extremely hard‑working group, and they understand that it's a long game, and you've just got to keep plugging away, and you can't get discouraged when you're not successful early because in this league there's a lot of times you're not going to be able to just go out there and say, hey, this is what we choose to do.  There are so many good players on the other teams that it's always going to be a battle, and they just know if we kind of hang in there and keep fighting and keep banging away that good things are going to happen for us.”