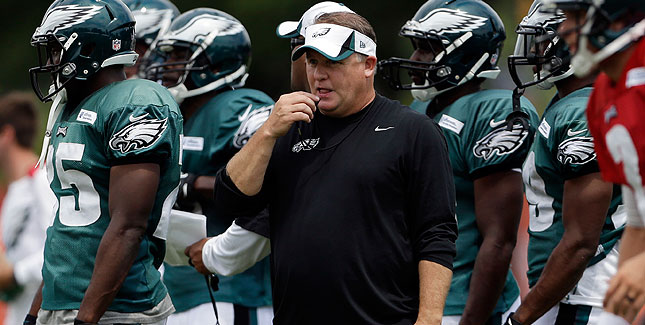 Chip Kelly's methodology and system have the Eagles poised to remain in the Super Bowl conversation for years to come.

Regardless of the outcome on Sunday night in Arlington Texas against the Dallas Cowboys, one certainty to come out of Chip Kelly's first season at the helm of the Philadelphia Eagles is that the future is arguably brighter than it's ever been in South Philly.

Just one year into Kelly's rebuild of a franchise that hasn't tasted meaningful football in the month of December in three seasons, the Eagles are on the cusp of a division championship and home playoff game.

While it's difficult to link where this team is today with preseason expectations or preconceived notions of how Kelly's philosophies would translate from the University of Oregon to the NFL, it's easy to see that the progress made in his first season is culture changing at the very least.

Almost since day one it seems every player in a locker room that posted a combined 12-20 record over the past two seasons bought into the methodologies that built Kelly's reputation in the college ranks-a tall order for a coach with  no previous NFL experience as a player or coach.

The players drank the post-practice smoothies, wore the heart monitors at practice, took advantage of the recommended eight hours of sleep per night and the results are staggering. Kelly's sports science has resulted in one of the healthiest rosters in the league. There hasn't been an Eagle placed on injured reserve since training camp and even aging veterans claim that they feel stronger than ever, even as the dog days of December now wind down.

And that's just year one.

On the field it seems Kelly has found his quarterback in the form of Nick Foles, who is intelligent enough to execute the complex reads required of the offense, strong enough to make the tough throws and accurate enough to make turnovers almost non-existent for this offense.

In the backfield resides LeSean McCoy who is poised to become the league's leading rusher who has already posted 1,476 yards through 16 games this season in just his fifth NFL season.

While the offensive line has been the keystone to the success of Kelly's high octane attack, given that sans a handful of snaps this season all five players have been together and accounted for on a weekly basis, a few tweaks for long-term depth may be necessary in the offseason, but this group shows little sign of slowing down anytime soon. Jason Peters was named a Pro Bowler along with Jason Kelce and Evan Mathis being chosen as second-alternates.

On the defensive side of the ball, coordinator Bill Davis Jr has guided his troops through a stretch of games in which they've held opponents under 21 points in 10 of their last 11 games and quietly become one of the more consistent groups in the league. All of this while dramatically altering the scheme from a 4-3 to a 3-4 but largely getting the most out of existing personnel.

The future is certainly bright on defense, especially after multiple offseasons to mine the ideal personnel to compliment an already budding group.

When owner Jeffrey Lurie hired Kelly in January, it's obvious to see that he was hoping to bring one of the game's more innovative minds to the National Football League and stay ahead of the curve which is ever-leading teams down the path of offenses winning championships. What likely wasn't on Lurie's mind is the fact that the Kelly hire very well provide the most stability of any situation in the division for years to come.

In New York, Tom Coughlin could be on the way out as Giants head coach under his own volition after a woeful season.

The Cowboys are the Cowboys and the Eagles have a chance to send that franchise into further self-questioning mode with another missed opportunity to land a playoff berth in the season finale.

Given Kelly's success at laying the groundwork in his first season and the uncertainty surrounding the Eagles in the NFC East, there is no reason not to believe that this team could become the class of the division and remain in the Super Bowl conversation for years to come.

Including, as unlikely as it once seemed, as early as this season.