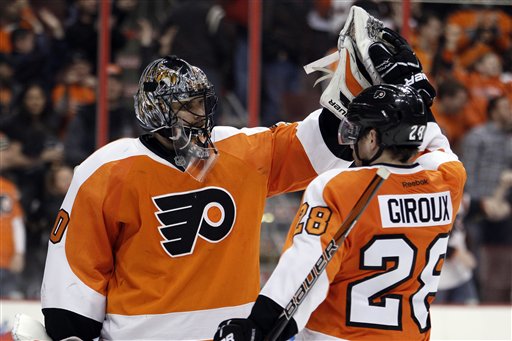 Ilya Bryzgalov will start in goal against Claude Giroux and the Flyers as they face the Edmonton Oilers. (Photo Courtesy of ESPN.com)

The Philadelphia Flyers return to action after the Christmas break and in the process are starting a six-game road trip that will take them through Canada and the West Coast.

The first of those six games is against an old foe. The Flyers are no stranger to the Edmonton Oilers – facing them one already this season – but Ilya Bryzgalov, the much-maligned goalie wearing the Orange and Black for the past two seasons is now in Edmonton, and he will get the start tonight.

The Flyers have a nine-game home winning streak but that gets put aside. On the road, the Flyers are just 6-9-4. Conversely, the Oilers struggle at home, playing to a 6-11-1 record.

Bryzgalov has played well in his brief eight game stint with the Oilers. Despite a 2-4-1 record, Bryzgalov has a 2.80 GAA and .915 save percentage.

The Flyers will send Steve Mason between the pipes. Mason is coming off a strong 4-1 win against Minnesota on Monday. He is 14-9-4 with a 2.35 GAA and .923 save percentage.

The Flyers will likely focus on keeping the top line rolling. Claude Giroux and Jake Voracek are currently riding career-long point streaks. Voracek has 13 points over the last eight games while Giroux’s streak has reached seven. Giroux, who has 13 points in those seven games, has an assist in each game.

Wayne Simmonds (4) and Scott Hartnell (2) also have point streaks dating back before the Christmas break.

Both teams have almost identical offenses. There are weapons throughout the lineup and not a lot to show for either side – both teams average 2.5 goals per game. The area that separates the two teams is defense and goaltending. The Flyers allow an average of 2.7 goals per game, a total of 101 on the season.

101 is also the number of goals the Oilers have scored. However, they have also allowed 3.4 goals per game, a total of 134 on the season.