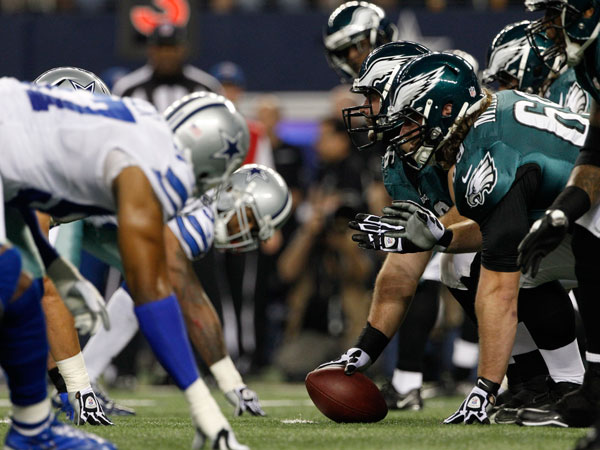 A playoff spot hangs in the balance in this Week 17 game between the Eagles and Cowboys that will decide the winner of the NFC East. (Photo Courtesy of Philly.com)

The stage is set for one of the biggest games in recent Eagles history. The Philadelphia Eagles are one win away from the playoffs.

Of course, so are the Dallas Cowboys, and the two are set to square off in a Sunday Night showdown from Arlington.

The Eagles come into the game with a 9-6 record, certainly more successful than expected early in the season. The Cowboys sit at 8-7, looking for the clean sweep against division opponents.

It was in Week 7 that the Cowboys stymied the Eagles offense for a 17-3 win at Lincoln Financial Field. While being one of the best games the defense has put together all season, this is a bounce-back game for the entire team.

The Cowboys are severely shorthanded without quarterback Tony Romo and middle linebacker Sean Lee. Essentially, the two most important figures to both sides of the ball will miss this winner-take-all, regular-season finale.

So, that leaves Nick Foles, LeSean McCoy and DeSean Jackson – among others – to go against Kyle Orton, DeMarco Murray and Dez Bryant.

Murray and defensive end Demarcus Ware both missed the Week 7 game against the Eagles. Murray should receive more carries due to Romo’s absence, an aspect that could work in Dallas’ favor.

The Eagles will also work a balanced offense that put up more rushing yards than the entire Chicago offense a week ago. McCoy leads the NFL in rushing with a chance to clinch the rushing title before kickoff.

Foles will also have multiple targets with Riley Cooper and Brent Celek joining the likes of Jackson and McCoy.

Realistically, this is a battle of two great offenses and too shaky defenses. Still, advantage to the Eagles on defense – they have allowed 21 points or less in nine of the last 10 games.

This is not the same team that played the Cowboys back in Week 7. Throw the previous scouting reports and history out the window. This could turn into an Eagles classic and set the stage for an even bigger game a week later.

Kevin Durso is a contributor for Eagledelphia. Look for his Monday Review the morning after every Eagles game. Follow him on twitter @KDursoPhilsNet.