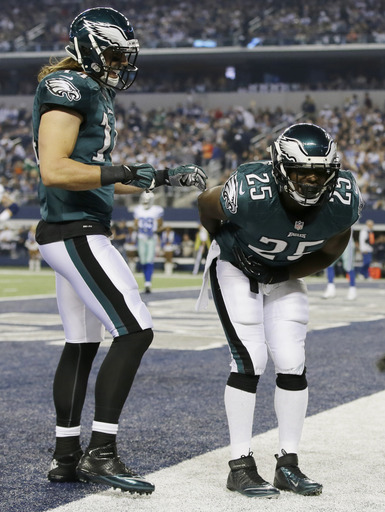 LeSean McCoy celebrates his second-quarter touchdown in the Eagles 24-22 win over the Dallas Cowboys. (Photo Courtesy of ESPN.com)

Take a bow, Birds. You’ve stunned the football world with an unorthodox offense and a defense that lived by the mantra “bend but don’t break.”

Just one season removed from a 4-12 disaster, complete with the firing of Andy Reid, the Philadelphia Eagles are in the playoffs with a 10-6 record.

It was an unlikely cast of characters.

Nick Foles, the second-string quarterback that proved to be more than capable of leading the franchise.

LeSean McCoy, the all-pro running back that shattered records in a season many would call MVP-worthy.

DeSean Jackson, Riley Cooper, Jason Avant, Brent Celek and Zach Ertz, a balanced mix of wide receivers and tight ends that made the Eagles dangerous on every play.

The defense, which frustrated in early games, proved to be the key to victory in the final game of the season. Brandon Boykin, the third cornerback on the depth chart, led the team in interceptions. Mychal Kendricks, a second-year linebacker, was the final game’s impact player.

The 10-6 record goes further than the coach. Every player made an impact somewhere, even down to kicker Alex Henery and punter Donnie Jones.

In a win-and-in game, did the Eagles make it look easy? No. They were significantly better than the Cowboys in many aspects. They didn’t show it on Sunday night.

But a win is a win. And that’s what keeps the Eagles season alive now and in the weeks to come.

The Eagles have been all about staying healthy and surviving the storm. Survival is the best way to look at this team in the recent weeks.

Call their run to the division what you will. They didn’t have to face Aaron Rodgers when they played the Packers. They took advantage. They won the Snow Bowl against Detroit, surviving more than just flurries from the Lions in the first half to dominate the second half.

This team started at 3-5, losing two division games in a row. That was halfway through the season at the start of November. As December comes to a close, they finish with a 7-1 record in the final eight games.

They may not do things by the book. They may struggle with the fundamentals. But this team seems to find a way to pull things out when it matters.

The numbers aren’t the only impressive part of this team. The concept of hosting a playoff game was crazy for more reasons than one. Not only did it seem like the Eagles were miles away from that entering the season, but they didn’t have the loyalty of the fans that would suggest a home-field advantage would matter.

Who would want to play that won seven of their last eight games at their field in the playoffs?

Lincoln Financial Field will be a madhouse on Saturday. There is no question. That is a credit to Chip Kelly and his team. They have revitalized the fan base.

There are still doubters out there that believe Kelly’s system won’t work and the Eagles aren’t for real. It doesn’t matter what awaits the Eagles in the divisional round or who they would play. The Eagles need one more win to win people over.

The fan base is on board. They believe that this team has a bright future, regardless of the result on Saturday. But the national skeptics and critics will have no choice but to buy in if Kelly and the Eagles win a playoff game.

But the Eagles know what they have. When a team wins, they call it getting the “Chip.” The Chip on the sidelines is the greater prize.

Expectations are a funny thing. For some, they are met, exceeded and make for pleasant surprises. For others, there is no satisfying plateau.

Remember way back to the earliest weeks of the season – the preseason for this team. What were your expectations then? Eight wins at most? Maybe six? Another last place finish?

Here it is, Dec. 30, 17 weeks later. The Eagles are NFC East Champions. They have 10 wins on the season. They are the third seed in the playoffs. They will host a playoff game on Saturday. Who would have thought that would happen?

Kevin Durso is a contributor for Eagledelphia. Look for his weekly game coverage before and after every Eagles game. Follow him on twitter @KDursoPhilsNet.