Phillies Fans Get Frustrated, But What Exactly Are The Atlanta Braves Doing? 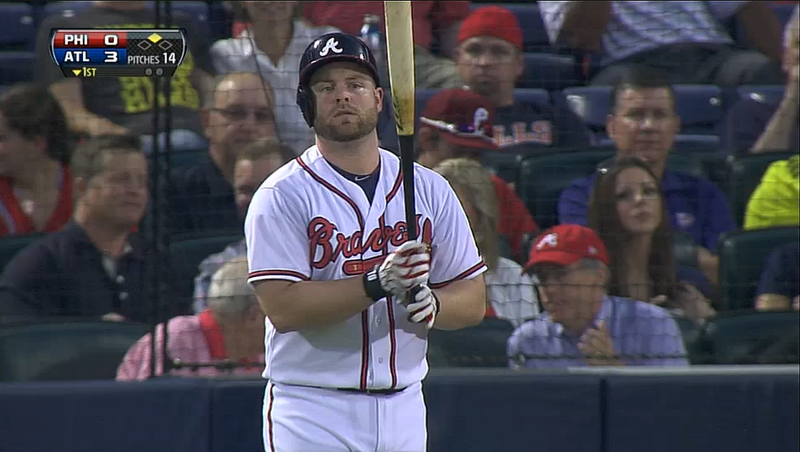 The frustration of Phillies fans is well-documented.   The Phillies seemed poised to add a big player, but instead they have settled for the likes of Marlon Byrd and Roberto Hernandez.  When assessing the Phillies' chances in the National League East, it is hard to feel optimistic.  But looking at one team the Phillies face frequently in the National League East, there is reason to feel at least a little bit better.   The Atlanta Braves may have done the least of any team out there.

Losses: Tim Hudson, Paul Maholm, and Brian McCann
The Braves lost their veteran ace of many years, Tim Hudson, and durable starter Paul Maholm.  Hudson is no longer ace material, but he was a reliable veteran arm in the starting rotation.   Hudson will be replaced internally from among their young pitchers.  Veteran starter Paul Maholm is also a free agent, someone who is decent enough and can pitch many innings.  Remember, this is the Braves rotation who was forced to start Freddy Garcia in a pivotal elimination game this postseason.

There is plenty of promising youth in the Braves rotation but it could easily go south.  Gavin Floyd could be that veteran, stabilizing presence, but the Braves' rotation as it stands right now is very thin.   They could still make a trade; David Price is still around.  But as of right now, Braves fans know that the starting rotation needs help.

At catcher the Braves have three catchers on the roster that will catch in 2014: Evan Gattis, Ryan Doumit, and Gerald Laird.   Laird is a solid defender with no bat.   Gattis and Doumit have been at different times solid bats with no defense.   It seems like the Braves will rely on Gattis and Doumit for offense and Laird for defense when they need it.  Gattis ended 2013 as the Braves' starting left fielder and Doumit spent the last few years playing a good amount in the outfield himself while backing up Joe Mauer.

The three may do about average for a team looking for a catcher, but the Braves have spoiled fans with seven All-Star seasons from Brian McCann during the last nine years.   That is quite a drop off.

What to do with Upton and Uggla?
The Braves could have given B.J. Upton's money to Brian McCann and retained him.  Upton is due $14.45 million in 2014 and Uggla $13 million in 2014.   Upton and Uggla were both benched by the latter part of the 2013 season, and Uggla was even left off of the Braves postseason roster.  Upton's lack of production in 2013 was made up for by Evan Gattis, who manned left field while Jason Heyward moved to center and Justin Upton to right.   With Gattis moving behind the plate, the Braves will once again need to rely on an Upton-Upton-Heyward outfield.   The Braves have no clear second base alternative for Dan Uggla.

The good news for the Braves is that Upton and Uggla were so bad that they almost have to do better in 2014.   Upton only batted .184 and Uggla .179 in 2013.   Uggla is battling complications from laser eye surgery and Upton remains a mystery.   The Braves cannot afford to cut either; Upton has four more years remaining on his contract and Uggla two.   The Braves lineup simply cannot sustain losing McCann and carry both of these players.

What Could the Braves Still Do?
The biggest surprise could be a trade for a major starter, such as the Rays' David Price.  Price is from Murfreesboro, Tennessee, a few hours north and west of Atlanta.  Price may be willing to sign a contract extension upon a trade.   But for the Braves to acquire Price, they'll probably have to give up one of their young starters such as Kris Medlen or Julio Teheran.

Their strategy could be to let the dust clear from free agent signings and sign whoever is left for cheap once the market subsides.  I am not sure that this is enough to excite Atlanta Braves fans.

So, Phillies fans, you may be unhappy about this offseason so far, but at least you are not a fan of the Atlanta Braves.