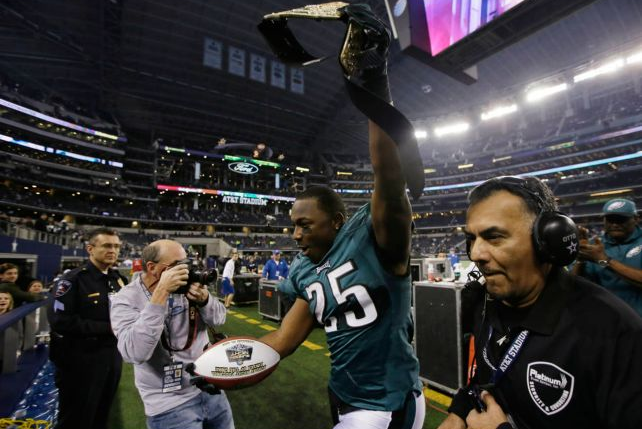 LeSean McCoy and the Eagles run to the postseason comes with the reward of playing the Jekyll and Hyde New Orleans Saints at Lincoln Financial Field in the opening round.

All things considered, it's been a pretty magical run for the Philadelphia Eagles in their first season under head coach Chip Kelly.

On the way to 10-6 and an NFC East championship the Birds avoided the likes of Aaron Rodgers, Reggie Bush, faced the high octane Detroit Lions in an unpredicted flash-blizzard and in the winner take-all season finale against the Dallas Cowboys, lined up against Kyle Orton at quarterback.

A charmed life, indeed, for a team that finished 4-12 last season suffering through the final days of the Andy Reid regime.

Don't mistake the good fortune that has found the Eagles though as a reason for why they will step onto Lincoln Financial Field for a playoff game for the first time in three seasons as the overwhelming reason why they are here.

This is a good and perhaps very good football team.

Kelly's offense set a myriad of records in year-one.

Defensively this team finished the season allowing fewer than 3.8 yards per attempt rushing and in 10 of the final 12 games of the year held opponents to under 21 points per game.

The reward for such a rapid turnaround for this franchise is a first-round date with the New Orleans Saints on Saturday night at Lincoln Financial Field, and it's a matchup that gives every opportunity for this run to continue.

Slowing down an offense that boasts the firepower of Drew Brees and Jimmy Graham is a daunting order for any team.

Yet, in their 47-year history, the Saints have yet to win their first road playoff team.

Even Brees is a much different quarterback outside of the fast track and climate controlled conditions of the Mercedes Benz Super Dome.

This season alone, the Saints are just 3-5 on the road while running the table and finishing 8-0 at home.

The climate will be anything but controlled at the Linc on Sunday night with temperatures expected to struggle to rise out of the teens.

But, in Philadelphia this is a tale of not-so-distant history recreated.

“Tampa Bay didn't win a game in cold weather until they came in here and did it [in the 2002 NFC Championship],” Kelly said “so we are not going to get really caught up in that one, I can tell you that.”

In their entire history to that point, the Buccaneers had just one victory in temperatures under 40 degrees and were 0-6 in postseason road games.

However, beyond simply the weather, New Orleans has lost consecutive playoff road games -- 41-36 to Seattle in the 2010 wild-card round and 36-32 to San Francisco in the divisional round.

He has thrown eight touchdowns and three interceptions three career road playoff losses while completing 106 of his 172 (61 percent) of his passes.

Needless to say the Eagles will need to draw on their strong defensive performance overall this season and (+12) turnover ratio in this game.

It's been a magical run thus far and the Eagles have played their way into holding the advantage of homefield against a team with a personality disorder when it comes to playing outdoors.

Because of their regular season success, there's no reason that this team can't keep the magic rolling well into the postseason.