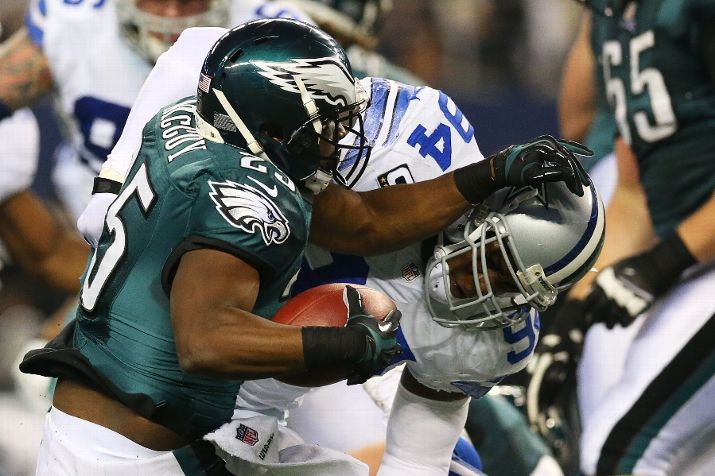 LeSean McCoy clinched the NFL's rushing title and set a pair of franchise records in the Eagles 24-22 win over the Dallas Cowboys. (Photo Courtesy of ESPN.com)

In the winner-take-all game, it was anything but easy for the Philadelphia Eagles.

With the NFC East title and a playoff spot on the line, the Eagles had to survive a hard-fought battle against the Dallas Cowboys.

Kyle Orton and the Cowboys certainly gave the Eagles more than they bargained for. There was no doubt about that.

But with a few crucial defensive plays, the Eagles survived the late surge, winning 24-22 and punching their ticket to the playoffs at AT&T Stadium in Arlington, Texas.

The game started in the Eagles favor. With the Cowboys driving, the first of many key defensive plays came when Mychal Kendricks stripped the ball from DeMarco Murray. Bradley Fletcher recovered to give the Eagles their first possession.

A holding call helped halt a good drive, but put the Eagles in position for a 47-yard field goal by Alex Henery.

The Eagles second drive was fueled by a couple of long passes to Zach Ertz, a 20-yard run by LeSean McCoy, a 20-yard reception by DeSean Jackson and a deep pass from Nick Foles to Jason Avant that put the Eagles inside the five. The next play was a three-yard touchdown pass from Foles to McCoy.

The Cowboys answered with a 17-yard touchdown pass from Orton to Gavin Escobar, cutting the lead to three.

With the Cowboys driving again, Kendricks made his second impact play on defense. He intercepted a pass intended for Jason Witten to give the Eagles a late possession. Two plays later, Foles found Brent Celek for a 14-yard touchdown pass.

The Cowboys rallied in the final 1:24 to kick a field goal, to go into halftime with the Eagles leading by a touchdown.

The Eagles went three-and-out on their first drive of the second half and the ensuing Cowboys drive resulted in a field goal.

On the Eagles next possession, Nick Foles was sacked on third down and fumbled with Demarcus Ware recovering at the Eagles 20 yard line. The Cowboys kicked another field goal on the drive to cut the lead to one.

Late in the third, the Eagles were driving toward the end zone when the Cowboys halted the drive inside the red zone, stopping Jackson at the goal line on a third-and-goal play. The Eagles elected to go for it on fourth down, using Foles on a sneak. He was stopped and the Eagles turned the ball over on downs.

The Cowboys next drive was similar. It started strong as they escaped the short field and moved to midfield quickly. But at the Eagles 40, the drive stalled and with time winding down, they went for it on fourth-and-one. The pass attempt by Orton was batted down by Connor Barwin.

The started an 11-play, 60-yard touchdown drive for the Eagles, using a series of short passes and runs to extend the lead. Bryce Brown scored on a six-yard run.

The Cowboys answered with a six-play, 80-yard drive capped by a fourth-down conversion on a 32-yard touchdown pass to Dez Bryant. Within two, the Cowboys attempted the two-point conversion, but failed, keeping the Eagles in the lead with 3:50 left.

The Eagles ran three plays and burned 1:51 of the remaining time before having to punt the ball away. The Cowboys took over on their own 32. On the first play that followed, Orton threw an interception to Brandon Boykin, sealing the Eagles win and the NFC East title.

A shaky game for the Eagles, that saw the Cowboys offense out-gain the Eagles, still resulted in a victory. The Eagles finished with 366 yards of offense compared to the Cowboys 417 – Orton had 358 passing yards.

Foles was 17-for-26 for 263 yards and two touchdowns. McCoy set the franchise rushing record and the yards from scrimmage mark with 131 rushing yards on 27 carries. His only catch of the game was the three-yard touchdown.

Defensively, Kendricks led the team with 12 tackles, a forced fumble and an interception. Boykin's sixth interception of the season went along with three tackles.

In Chip Kelly's first season, the Eagles finished the regular season with a 10-6 record. By virtue of back-to-back wins to end the season, they will be the third seed in the NFC Playoffs. They will host the New Orleans Saints on Saturday at Lincoln Financial Field at 8 p.m.

Kevin Durso is a contributor for Eagledelphia. Look for his Monday Review the morning after every Eagles game. Follow him on twitter @KDursoPhilsNet.