Eagles 2014 Free Agents: Who Stays and Who Goes 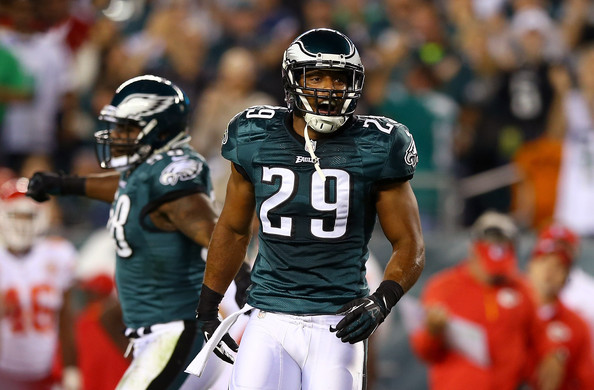 Eagles safety Nate Allen played the best football of his career in 2013 and will be a difficult decision for the front office when it comes to deciding whether or not to re-sign him.

The Philadelphia Eagles by virtue of just about anyone's estimation are ahead of the curve in rebuilding a roster that won a combined 12 games in the two seasions prior to hiring Chip Kelly as head coach.

In year one of Kelly's tenure, the Eagles won ten games, the NFC East division championship and hosted the first playoff game at Lincoln Financial Field since January 2011.

Along the way, Nick Foles emerged as a franchise quarterback, LeSean McCoy won the rushing title and set the single season yards from scrimmage and rushing yards franchise records and Billy Davis' defense took great strides including holding 10 of the final 12 opponents faced under 21 points per game.

Still though, the work is just beginning in reshaping the Eagles roster and plugging holes heading into the second season of Kelly's term.

The Eagles have ten free agents that a decision will need to be made on whether they are re-signed or allowed to go elsewhere.

Here is my take on who stays and who should go.

QB Michael Vick: Vick has made it clear in recent weeks that his stated goal is to be a starting quarterback in this league and he is likely to test that market. Much like a year ago when there were not any opportunities for him to walk into a team as their starting quarterback, the market likely hasn't changed for a 34-year old injury and turnover prone quarterback. Chip Kelly said earlier this week that he 'loves' Michael Vick, but odds are the 12-year veteran will land a backup job elsewhere this time around. GO

WR Jeremy Maclin: The Eagles had the highest of expectations for Maclin prior to him tearing his ACL in training camp. Prior to the injury Maclin seemed poised to let his playing on the field justify a big money contract extension with the Eagles or set the stage for a free-agent spending spree. Looking at the numbers DeSean Jackson produced in this system in 2013, it's very appetizing to think about what Maclin's blend of size, speed and hands could accomplish with Kelly and the mistmatches the pairing of he and Jackson would provide. If he shows he can stay healthy and is fully recovered then re-signing him should be a priority. STAY

WR Riley Cooper: It's obvious that Foles and Cooper developed a connection in the second half of the season. Cooper's 835 yards and eight touchdowns illustrate that. However, if Maclin returns and the Eagles can add a more well-rounded and talented receiver such as Penn State's Allen Robinson or Mike Evans of Texas A&M, they may be better suited in Kelly's offense. Cooper could be in for a modest pay day but he's likely to get it elsewhere. GO

P Donnie Jones: This one is a no-brainer. As inconsistent as Alex Henery was, Jones was dominant. The Eagles consistently flipped the field position game thanks to Jones' 44.9 yards per punt average this season. He should have been an All-Pro or at the very least gone to the Pro bowl. STAY

DE Cedric Thornton: Thornton started all 16 games for the Eagles this season and drew repeated and plenty of praise from Kelly throughout the year. An argument can be made that Thornton finished 2013 among the Eagles top defenders not only against the run but in generating a push in the pass rush. Finishing with 60 tackles, one sack and one forced fumble, Thornton should see an expanded role next season. STAY

OLB Phillip Hunt: One of the pieces of Davis' defense that is miscast in the 3-4. He's a suitable 4-3 outside linebacker but doesn't seem to have a role outside of special teams in Philadelphia. GO

S Kurt Coleman: Among the top priorities for Kelly, general manager Howie Roseman and the front office this offseason has to be bolstering the athleticism and toughness of special teams. While Coleman has shown that he is incapable of being a starting safety in this league, he is a very stout special teams player and solid in coverage. The Eagles kick and punt coverage units could use more players like Coleman. STAY

S Colt Anderson: As well as Anderson has played in recent years on special teams, it seems that the clock is striking midnight for this Montana alum/Eagles special team Cinderella. His error on the final kickoff against the Saints in the playoffs helped spring the return that broke the Eagles back. It's time to upgrade this unit. GO

S Nate Allen: It took playing for Bill Davis to bring out Allen's full potential and the veteran played the best football of his career in 2013. Earl Wolff will occupy one of the starting positions next season and the Eagles would be wise to make a play for a free-agent starter at the position or draft a safety high in the draft. However, as the Patrick Chung experiment shown for all to see, depth at this position is crucial and even if the Birds draft a safety, there's no telling whether or not he'd be ready to step in and start on day one. Allen played well enough this season to show that with improvement this offseason, he and Wolff could make a formidable pair.  STAY

DE Clifton Geathers: Geathers didn't acc0mplish much this season and the Eagles had already drafted his replacement Joe Kruger last spring. Kruger spent the entire season on IR, and he could very well be an impact player next season. GO