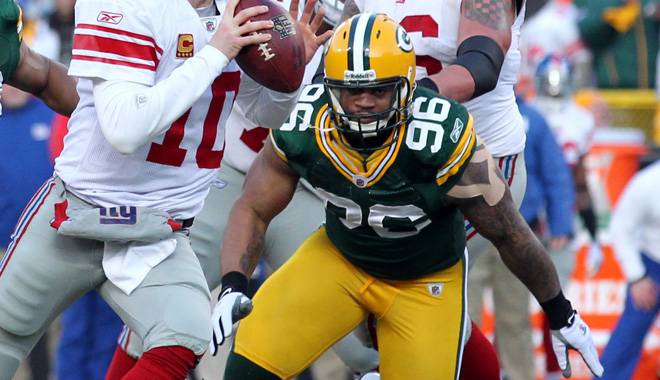 Mike Neal could emerge as one of the Eagles top free agent targets if the Green Bay Packers are unable to reach a deal to keep the 26-year old in March. (Image courtesy of PackersInsider.com)

Each Friday morning we will select some of the top questions we receive on Twitter and give them the kind of insight and analysis that can't fit within 140 characters. To have your question asked simply tweet it to @MattLombardo975 or@EagledelphiaPA and check back each Friday morning to see if it makes the cut!

FROM: JR Willis ‏@penseur76: What mid level FA do you see the Eagles signing?

Keep an eye on this space over the next few weeks as we compile the ultimate Eagles free agent shopping list, highlighting some of the marquee names and possible dark horse targets for Howie Roseman and the front office in the coming months.

With defense expected to be a focal point of this off-season and linebacker being a position that is destined to be upgraded, at least on the outside, two mid-level names jump off the page of pending free agents.

Mike Neal of the Green Bay Packers could emerge as a top target of Roseman when the league year opens in March.

The Packers could make a push to retain 2010 second-round draft choice who finished the season with five sacks to go with his 47 tackles in 2013. The 26-year old has the frame at 6'3, 285 pounds to make the transition back to his natural position of outside linebacker.

Chip Kelly, Roseman and even defensive players alike have made no secret that adding a potential double-digit sack getter in 2014 should be a top priority and Neal certainly fits that bill. At the very least, the 26-year old would continue to add an infusion of youth to Billy Davis' group.

Another linebacker to watch is Donald Butler of the San Diego Chargers.

It seems counter-intuitive to think the Eagles would allocate free-agent dollars to an inside linebacker position that appears stable with the likes of DeMeco Ryans and Mychal Kendricks, but the team had been seen kicking the tires on some inside linebacker prospects at the Senior Bowl last week and certainly could be on the lookout for starter-quality depth to enhance a rotation at that spot.

Butler, 25, finished the season with 84 tackles and one interception. While it's unlikely he would leave San Diego without the assurance of a starting job waiting at his next destination, if the Eagles are serious about rotating both Kendricks and Ryans next season, Butler could be an affordable option.

Entering free agency the Eagles have roughly $17 million in cap space but could maneuver to have as much as $26 million at their disposal moving forward.

It should make for an intriguing offseason entering year two of the Chip Kelly era.