Evan Turner’s Last Second Heroics Give the Sixers a Win 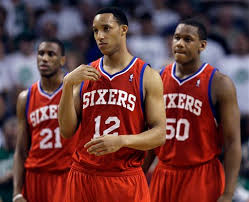 It was a back and forth game all night, as there were six lead changes and 12 ties throughout the game. The Sixers played much better team defense tonight than many of their games of late. Their biggest issue on defense was stopping Celtics’ center Jared Sullinger, who destroyed the Sixers in the paint, finishing with 24 points and 17 rebounds (8 offensive).

The Sixers’ starters had a very balanced night scoring the ball, with Spencer Hawes leading the charge with 20 points and 8 rebounds, but the ball was in Turner’s hands with the game on the line.

With 11 seconds left on the clock, Celtics’ forward Kris Humphries missed a mid-range jump shot that would have put them up by three points. Instead, Michael Carter-Williams corralled the rebound and pushed the ball down the court. He immediately looked to get Turner the ball, which he did. Turner made his move on Jerryd Bayless, got himself some room, and finished an extremely tough layup as time expired.

The win moves the Sixers into 4th in the Atlantic Division. They have off tomorrow before they face the Hawks at home on Friday at 7:30 p.m.

The video of Evan Turner's game-winning layup is below.