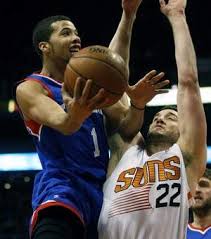 Goran Dragic and the overachieving Phoenix Suns are in Philly tonight to face the 76ers at 7 p.m.

The Suns are coming in fresh off of a win last night in Cleveland, where Markieff Morris lit up the Cavs for 27 points and 15 rebounds off the bench. The Suns’ depth in their frontcourt is what will give the Sixers issues tonight.

When these two teams met in Phoenix in December, it was a battle of the guards, where Michael Carter-Williams and Toney Wroten combined to score 49 points and Goran Dragic and Eric Bledsoe combined to score 41. The difference, and why the Sixers lost that game, is because of the dominant frontcourt play of Miles Plumlee and Marcus Morris.

The Suns now have multiple scoring options, including the Morris twins, Alex Len, and Channing Frye, but they will be without Eric Bledsoe this time.

The Sixers, coming off a home loss to the Thunder on Saturday, will have Evan Turner this time around against the Suns. He and MCW should be able to handle the Suns backcourt without Bledsoe.

If the Sixers want to come out of this game with a “W”, they need to get solid, productive minutes out of their big guys, including Thaddeus Young. In fact, Young might be the key to this game. Not so much with his offense, but with his defense. Thaddeus has been wreaking havoc as a defender, as of late, racking up 15 steals in the past three games. He can’t let the Suns get anything easy down low, which is a task easier said than done.

Prediction: I think these two young teams keep the pace at a high level throughout the night. I think the Suns will struggle to score late without Bledsoe, and the Sixers will take advantage of that on the other end. Sixers get a scrappy win, 118-113.