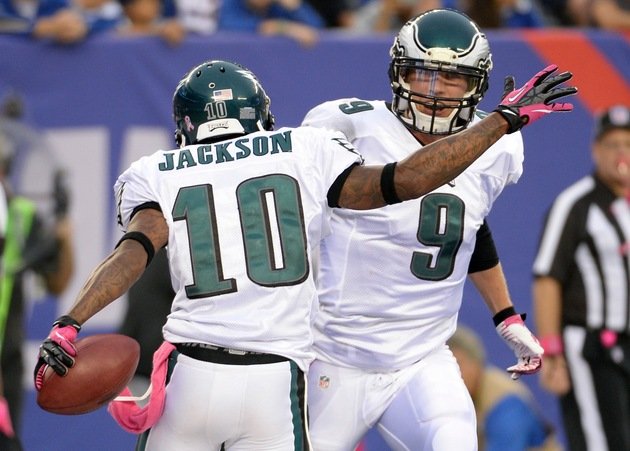 Nick Foles and DeSean Jackson will be teammates in the Pro Bowl thanks to both being selected by Deion Sanders in the first Pro Bowl game that is "Unconferenced." (Image courtesy of Yahoo Sports)

The first year of the NFL Pro Bowl being 'Unconferenced" means that teammates will now be rivals, at least for a day, and the four Eagles in Hawaii are no different.

Thanks to a fantasy draft between team coaches/general managers Deion Sanders and Jerry Rice, the elected Pro Bowlers are no longer bound to playing for either the AFC or NFC. As a result, two Eagles will face off against two of their teammates on Sunday in Honolulu, HI.

Evan Mathis was selected by 'Team Rice" on the first day of the draft, Wednesday, and on Thursday he was joined by teammate LeSean McCoy.

Meanwhile, Nick Foles and DeSean Jackson will pair up against them as members of "Team Sanders." Sanders obviously hopes that the duo replicates their success this season that say the quarterback-receiver tandem team up for seven touchdown passes in 2013.

McCoy was the first-running back selected in the draft, following up a campaign where he finished as the rushing champion with 1,607 yards to go with nine touchdowns.

Foles on the other hand, along with fellow quarterback Alex Smith, were the last two players to go off the board.

About 1,000 fans attended the draft, which had cheerleaders, mascots, lei for each player and colored surfboards used as draft boards.

Eagles left tackle Jason Peters was elected to the game but chose not to attend.

Commissioner Roger Goodell hopes that the new fantasy football type format will add excitement to a game that despite successful television ratings in recent years has drawn plenty of criticism for it's poor quality of play.

The 2014 Pro Bowl will be played at Aloha Stadium in Honolulu, Hawaii for the 34th time and again serve as the signature event to kick off the week leading up to the Super Bowl.