Tough road trip for Flyers begins in Anaheim against Ducks 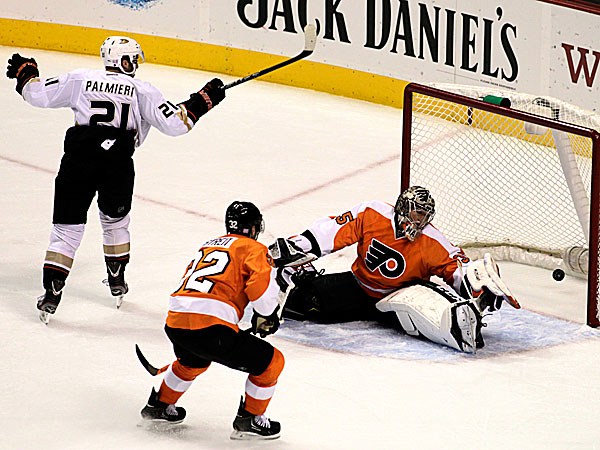 Kyle Palmieri scored two goals in the Ducks 3-2 win over the Flyers on Oct. 29. The Flyers open a three-game road trip in Anaheim on Thursday. (Photo Courtesy of Philly.com)

Tuesday night's game was a much-needed one for the Philadelphia Flyers. The 5-0 win gave the Flyers some form of confidence as they begin a stretch of games on the West Coast.

The Flyers last road trip featured games against the Canadian teams of the West. This time, they will tour California. It starts against the Anaheim Ducks on Thursday night at 10 p.m.

Right away, the Ducks look daunting simply because they have played so well all season. They have the most points of any team in the NHL with 83 points and a 39-11-5 record. At home, they are 21-2-2.

For scoring threats, look no further than Corey Perry and Ryan Getzlaf. Perry leads the Ducks with 28 goals and also has 30 assists. Getzlaf leads the team in points with 61 and assists with 36.

Defensively, the Ducks have a strong group headlined by Cam Fowler. They average 2.4 goals allowed per game.

The Flyers started to get their top line working on Tuesday with Claude Giroux and Scott Hartnell each picking up three points. The recent waiving of Chris VandeVelde also seems to indicate that Zac Rinaldo will be back in the lineup on Thursday.

Shuffling the lines in the previous game seemed to work. But it was no secret that Detroit was short-handed due to injury. The Ducks will not be short-handed. They are among the healthiest teams in the league. So this could be a totally different game, especially if the Flyers get caught napping at any point.