5 Moves The Sixers Should Make 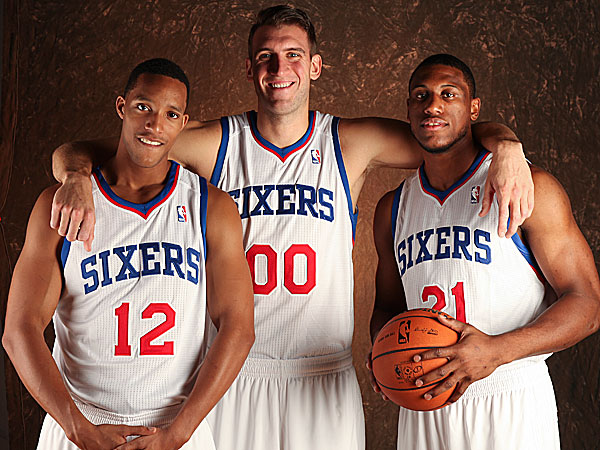 First off, a quick introduction on who I am. My name is Eric and I graciously welcomed to contribute to the site on an editorial basis, while filling in here and there. I have a background contributing posts to HalftimeHennessy.com, blogging about University of Maryland basketball, as well as interning for sports radio stations in DC and Philly.

Enough about me. With the trade deadline approaching on Thursday, 2/20, what better time than now to look at 5 moves the Sixers should make in their push for 2013 terribleness and 2014 excellence. Quick disclaimer around no draft picks being included in these deals. There will be plenty written about that elsewhere.

While Young's contract is currently the biggest burden on the roster (3 years, $8.85MM/year), his value to the team is at an all time high. Young displays leadership skills that the average fan does not necessarily see from Evan Turner or Spencer Hawes. The biggest knock on Young has always been his in between position (small v. power forward), but it seems to be a thing of the past. If the Sixers do look to move Turner or Hawes (as heavily rumored), it would be wise to keep at least one veteran on the roster to guide players like Tony Wroten, Nerlens Noel, and Michael Carter-Williams.

Spoiler alert, there will be a common theme in the trades proposed in this post. In this proposed deal the Sixers would ship Turner to the Pistons for Greg Monroe (and a throw in of Peyton Siva, the former Louisville point guard). The reason this deal makes sense for the Pistons is that it allows Josh Smith to slide back over to the power forward position, his natural spot, while sliding Turner in to the starting small forward spot. A starting five of Brandon Jennings, Singler/Stuckey/KCP, Turner, Smith, and Andre Drummond is a lot more appealing than starting three power forwards. From the Sixers standpoint, inserting Greg Monroe in to the starting lineup in 2014 next to Nerlens Noel provides a perfect ying & yang, while also shifting veteran Thad Young to the bench as your sixth man.

One of the teams in contention for Tankapalooza was supposed to be the Phoenix Suns. In a shocking plot twist that could only mirror "The Sixth Sense", the Suns are in the playoff hunt! Currently the Suns boast a solid backcourt with Goran Dragic (filling in for the injured Eric Bledsoe) and Gerald Green to go along with a young frontcourt consisting of the Morris twins, lotto pick Alex Len, Channing Frye, and Miles Plumlee. What they lack is a "glue guy" who can fill the stat sheet in a variety of areas. Insert Evan Turner, a young piece who could benefit from a scene change. If Jason Richardson gets healthy, he may be able to provide some deep scoring off the bench. From the Sixers standpoint, it's a straight salary dump to clear even more space with Okafor. I also like the prospects of picking up a young 2 guard in Archie Goodwin. In the Sixers mind now, accrue as much young talent as possible and see what sticks.

In this 3-way deal we cover off on a lot of rumors and try to take care of them in one deal. Let's briefly review the benefits for each team. For the Sixers, they not only move pieces who are not a part of the long-term plan, but they also pick up some players who could be. Asik has been connected to the Sixers all season long because of the Sam Hinkie connection. He could be a valuable compliment to Noel as the team's starting power forward. Along with Asik, Kidd-Gilchrist could use a change of scenery since his tenure in Charlotte has been as dull as a woodchip. From the Rockets perspective, a stretch 4 in Spencer Hawes would help open up their offense a bit and not clutter the middle for Dwight Howard. Think about how a less talented Pau Gasol sliding in next to Howard and the possibilities. Finally, from the Bobcats perspective, Turner would be a nice fit because of ability to be content as a third option on offense yielding opportunities to Kemba Walker and the big man Al Jefferson in Charlotte.

5. Sixers sign Seth Curry and DeAndre Liggins from the NBDL

I started with a move that was not a trade and will end with a move that is not a trade. This year we have seen the Sixers shuffle talent in and out (Daniel Orton, Lorenzo Brown, Darius Morris, Elliott Williams, Dewayne Dedmon) which shows the casual fans that the team is not tied to any player and is willing to kick the tires on a variety of players. Two guys who I would like to see get some burn on the Sixers from the NBDL are DeAndre Liggins and Seth Curry, both currently not tied to any NBA team. Liggins has played in a handful of games for the Orlando Magic and OKC Thunder after playing college ball at Kentucky. Curry has yet to scratch the NBA hardwood after going through camp with the Golden State Warriors coming out of Duke. Both guys show the ability to score which has been a downfall of the Sixers this year. A player like Curry (averaging about 20 ppg in the D League) could provide a spark off the bench and instant offense. So I ask, why not?

There you have it, five potential moves that the Sixes should make in the upcoming week to help better them for the long term.

Let's see what you've got. Enter your moves and predictions in the comment section below.

View All Posts By Eric DeLash

View All Posts By Eric DeLash