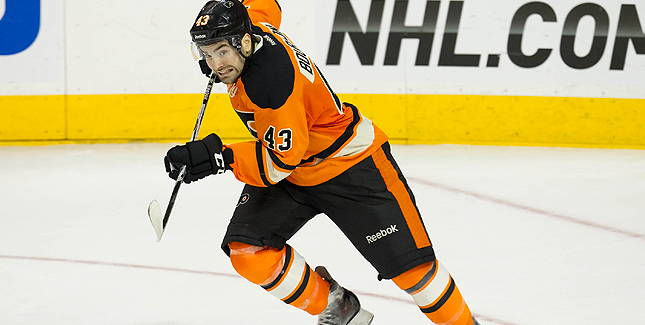 Image courtesy of CSNPhilly.com
It’s been a tough few years for Marc-Andre Bourdon. The 24-year-old defenseman is struggling again with post-concussion symptoms after it seemed as though he was cleared of such issues in the middle of January. As the Flyers and their fans have seen in recent memory with the career and life of Chris Pronger, Bourdon’s situation has now become pretty serious and it is important to make sure the young defenseman is living fine rather than making sure he can play again.

Bourdon had taken part in seven games with the Adirondack Phantoms before his issues occurred again. According to Dave Isaac of The Courier-Post, Phantoms’ head coach Terry Murray said the incident that lead to Bourdon’s concussion symptoms again came in the team’s 3-2 loss to the Wilkes-Barre/Scranton Penguins on February 8th. Murray said the defenseman went to check a Penguin in the neutral zone, but the Pen “dipped down on him” which led to Bourdon smacking his head on the glass. Bourdon needed stitches after the incident, as he was bleeding from above his eye. Murray then went on to add that Bourdon will have days where he seems fine, and then he’ll have days where he will call the medical staff and tell them he isn’t coming in because he’s been up all night due to headaches.

Bourdon has played a total of 24 games for the Phantoms over the last two seasons, as he has compiled one goal and six assists in the process. The defenseman is a restricted free agent this summer.

In other AHL news, the Phantoms dropped their contest at the Wells Fargo Center on Saturday to the Bridgeport Sound Tigers by the count of 3-2. Nick Cousins and Chris VandeVelde scored for Adirondack in the loss, while Carsen Chubak made 26 saves on 29 shots against. Anders Nilsson recorded the win for the Sound Tigers with a 26-save effort.

The tilt started with a scrap between Brandon Manning and Anders Lee just 28 seconds into the game. Later in the first period, Bridgeport gained the lead with Johan Sundstrom’s sixth of the season off of helpers from Joel Broda and Matthew Pistilli. The opening frame concluded with Bridgeport d-man Brett Gallant recording 29 PIMs with four seconds left, as he also took part in a bout with Manning.

Cousins’ tally equalized the game at one 6:40 into the middle frame, as his wrist shot squeaked through Nilsson’s left hip and arm for his fifth of the season. Brandon Alderson recorded the lone assist on Cousins’ goal.

To start the third period, the Phantoms took advantage of a 5-on-3 man advantage to take the 2-1 lead. With Matt Donovan recording a holding penalty after the final whistle of the second period, Sundstrom was called for boarding just 1:05 into the final stanza to hand Adirondack a 55-second 5-on-3 power play. It took 30 seconds for the Phantoms to convert, as Jason Akeson set up VandeVelde with a perfect cross-ice pass to allow the forward to slam it home for his ninth of the season and the Phantoms’ first lead of the game.

The lead didn’t last long, as Chris Langkow scored a shorthanded tally to make it 2-2 with 18:03 left in regulation. Daymond Langkow’s cousin was set up with a pass from Scooter Vaughan. Unfortunately for the Phantoms, Aaron Ness recorded the game-winning goal with 10:39 left in the tilt, as Chubak sorely misplayed a weak shot from the blue liner.

In the OHL, Anthony Stolarz has returned to practice for the London Knights. The Orange and Black’s second-round pick in the 2012 NHL Entry Draft, who suffered a severe cut on the back of his leg in a game against the Saginaw Spirit on January 17th and needed 55 stitches, began practicing again on Friday, according to GM Paul Holmgren. Stolarz is 21-4-2 this season with the Knights, who are fourth in the OHL’s Western Conference with 89 points.

Scott Laughton was named the OHL Player of the Week for the week of February 17th to February 23rd, as the forward had seven points and a plus-2 rating in four games for the Oshawa Generals. Laughton’s performance on Sunday night against the Kingston Frontenacs helped him earn the honor, as he recorded a hat trick and produced an assist as well in the Generals’ 7-2 win. Laughton also had a two-assist game in the Generals’ 6-3 loss to the London Knights on February 17th and a goal against the Frontenacs in Oshawa’s 3-2 win over the club on Friday.

With his hat trick on Sunday night, Laughton gained control of the team lead in goal for the Generals, as the forward has 37 to his credit on the season. Michael Dal Colle still leads Oshawa in scoring with 87 points.