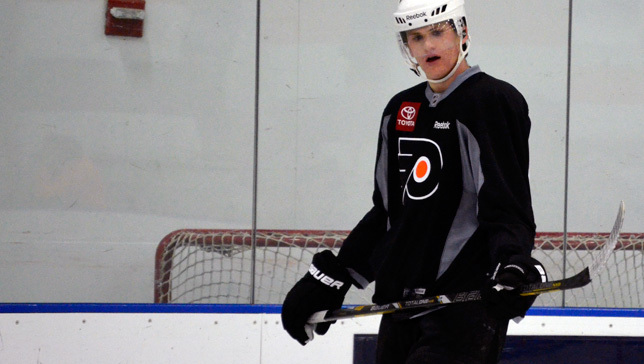 Image courtesy of flyers.nhl.com
One of the reasons the Philadelphia Flyers drafted Samuel Morin 11th overall in the 2013 NHL Entry Draft is due to the fact he plays with a bit of an edge. Last Wednesday, Rimouski, Oceanic saw that edge, as the 6'6" blue liner threw his stick in anger after his squad dropped a 5-2 decision to Blainville-Boisbriand, Armada.
After the final horn sounded, Morin broke his stick at the blue line and launched his piece of lumber towards the end boards. According to TVA sports, witnesses stated a fan in a wheelchair was hit with a piece of the stick while leaving the arena, but nobody was hurt from the incident. Morin received a two-minute minor for "throwing a stick or piece of equipment" and a game misconduct for the incident. Along with the game misconduct, the defenseman was dealt a two-game suspension and a $250 fine.
As you can see here, Morin slams his stick against the boards near his own blue line and then throws the stick down the ice. You'll see Morin at the top of the screen around the eight-second mark.
Morin is in his third season with Rimouski, Oceanic in the QMJHL, as he currently leads all Flyers' prospects on the blue line with 23 points in 39 games. The d-man also has 92 PIMs this season and has taken part in a pair of fights. Morin registered 117 PIMs in 46 games last season, as he dropped the gloves four times during the regular season. He is currently an alternate captain for Rimouski, Oceanic.
The Lac-Beauport, Quebec native is the first defenseman the Flyers have selected in the first round since they picked Luca Sbisa 19th overall in the 2008 NHL Entry Draft. Morin is also the highest pick the Orange and Black have used on a blue liner since Joni Pitkanen was taken fourth overall in the 2002 NHL Entry Draft.
In the AHL, the Adirondack Phantoms beat the Hershey Bears by the count of 4-1 at the Wells Fargo Center on Saturday. Led by a three-point game from Tye McGinn, the Phantoms were able to score a pair of goals in the first period and a pair of goals in the third period to please the fans in Philadelphia. Along with McGinn's performance, Kris Newbury had a pair of helpers and Jason Akeson recorded a goal and an assist.
Tyler Brown and McGinn made it a 2-0 lead for Adirondack just seven minutes into the game, as Marc-Andre Bourdon and Kyle Flanagan assisted on Brown's tally. Matt Watkins made it a 2-1 game late in the opening frame with Hershey's lone goal of the contest, as former Flyer Ryan Potulny had the primary assist. Ben Holmstrom and Akeson scored 3:06 apart early in the third to make it a 4-1 final. Oliver Lauridsen recorded a fighting major late in the game thanks to a bout with Derek Whitmore.
The Phantoms will be back at the Wells Fargo Center on February 22nd, as they will host the Bridgeport Sound Tigers. Adirondack currently sits 11th in the AHL's Eastern Conference with 46 points.
FORWARDS
DEFENSEMEN
GOALTENDERS