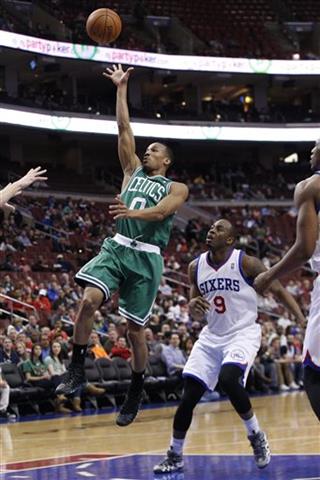 Green torched the Sixers for 36 points on 11-18 shooting from the field. Five of those 11 were from 3-point territory. But it wasn’t Green alone who was responsible for the Sixers downfall, Celtics’ center Jared Sullinger went to work down low tonight, finishing with 19 points and 10 rebounds, while also adding 5 assists. Brandon Bass took advantage of Thad Young down low tonight and finished with 18 points and 6 rebounds.

Rajon Rondo did start tonight for the Celtics, and he nearly finished with a triple-double. He finished with 8 points, 11 assists, and 9 rebounds.

Despite many Celtics’ players putting up impressive numbers, the Sixers kept the game close throughout the night. They just had no response for Jeff Green’s offensive outburst.

Thaddeus Young led the team with 20 points (on 17 shots), while only grabbing 3 rebounds, and they were all offensive. The Sixers found very balance scoring tonight from both their starting five and their bench.

Toney Wroten led the bench with 18 points, including a ¾-court shot that hit nothing but net which should be on Sports Center Top 10 tonight.

After winning Eastern Conference Rookie of the Month for the month of January tonight, Michael Carter-Williams played mediocre tonight finishing with 11 points, 6 assists, and 3 rebounds. He also turned the ball over 4 times on the night.

The Sixers look to bounce back on Friday as the Lakers come to town.

Wroten's crazy shot is below.