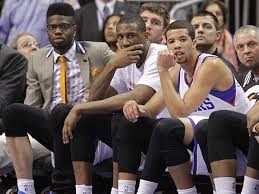 The embarrassing season goes on for this Sixers team, reaching a new low tonight. The hapless Bucks, who normally have trouble scoring the ball, lit the Sixers up tonight. Seven Bucks players reached double digits points, and the team shot an incredible 57% from the field.

The Sixers defense was disgraceful all night, allowing 73 points in the first half… TO THE MILWAUKEE BUCKS! O.J. Mayo came off the bench and was on fire from behind the arc, nailing 7 of his 9 3-point attempts. He finished with 25.

For the Sixers offensively, it was another impressive outing from newly crowned go-to-guy Thaddeus Young. Young finished with 28 points to go along with 5 rebounds, 7 assists, and 6 steals. Michael Carter-Williams had a nice night scoring the ball, as he finished with 20 points, but he turned the ball over 5 times while only finishing with 3 assists. That’s not a good ratio. Tony Wroten drew the start tonight at the other guard position, and he and MCW played well together. Wroten finished with 19 points and 5 assists.

Personally, I am disappointed with what Arnett Moultrie has shown us in his extended playing time. He finished with 6 points and 8 rebounds in 28 minutes of play. He’ll have to turn it on for the rest of the season if he wants to stick around next season.

Henry Sims, Byron Mullens, and Eric Maynor all made their 76er debut tonight, but none of them contributed in a noteworthy fashion. I’d like to see Mullens get more minutes at center just to see what he is capable of.

The Sixers face another struggling team on Wednesday, as the Orlando Magic come to town. This will be the Sixers’ last chance to gain a win in the month of February.