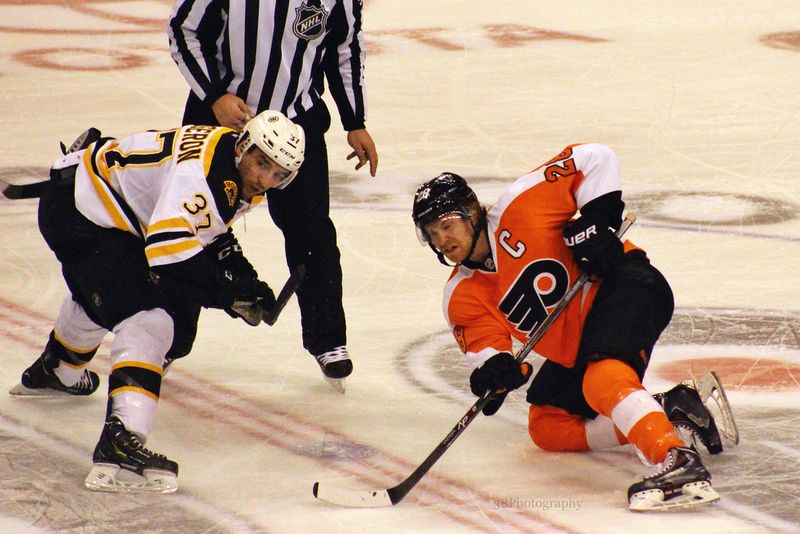 Reilly Smith was the fifth Bruin to shoot against Steve Mason in the shootout and scored the game-winning goal to give Boston a 4-3 victory Sunday afternoon in South Philadelphia.

Andrej Meszaros, Zdeno Chara, and Patrice Bergeron scored for Boston. Bergeron also scored in the shootout. Tuukka Rask stopped 49 of 52 shots, including 16 in the third period. Boston has now won 15 of their last 16 games and nine straight on the road.

Vincent Lecavalier scored twice for the Flyers, including the tying goal with 24 seconds remaining. Kimmo Timonen recorded a goal and an assist for Philadelphia. Jakub Voracek notched two assists. Claude Giroux had the Flyers lone tally in the shootout. Steve Mason was shaky in net for the Flyers, but still recorded 27 saves. Philadelphia has now lost three of four.

The late season matinee started out well for Philadelphia, as Lecavalier notched his 17th goal of the season and 400th in his career, just 5:25 into the game. The demoted center received the puck from Adam Hall just passed the blue line, and he ripped a slapshot passed Rask. The puck appeared to be a knuckler and hit the bottom of Rask’s glove as the Flyers took a 1-0 lead.

The Flyers would not hold their lead for long, as Meszaros, playing in his first game against his former team, found himself alone at the point and glided in to rip a wrist slot from the slot passed the Flyers goaltender. Brad Marchand and Dougie Hamilton got assists Meszaros’ 7th goal of the year.

The Flyers began to up the ante with a strong physical play throughout the period, outhitting the Bruins 22-8. The biggest hit of the period came from Zac Rinaldo as he put Bruin star forward Jerome Iginla in his crosshairs. Not only did Rinaldo take out Iginla, but also David Krejci and a linesman. Iginla was not pleased with the hit, as he and Rinaldo tussled after the hit, which resulted in a five-minute major for each.

Philadelphia would end the period on a positive note as Jakub Voracek would skate coast-to-coast and feed Timonen with a cross ice pass as the defenseman would notch his fifth goal of the season. The Flyers entered the second period with a 2-1 lead.

Boston came out physical in the second period after being outhit 22-8 in the first period by the Flyers. The Bruins quickly took advantage of an Adam Hall hooking penalty, as Chara scored his 17th goal of the season just 11 seconds into the power play.

The Bruins would keep the pressure on Philadelphia, as Bergeron would score with just under nine minutes remaining in the period to give Boston their first lead of the game. Bergeron was able to beat Mason, who appeared out of position, and had the puck slide underneath his pad. The Bruins would take a 3-2 into the third period.

While Steve Mason kept the Flyers in the game with timely saves, it was the Boston netminder who saved the game for the Bruins. Philadelphia peppered Rask with 17 shots in the third period and he was up to the task throughout the period, until the final 24 seconds.

As the Flyers dumped the puck into the Bruin zone, the puck would take a fortunate bounce over defenseman Johnny Boychuk’s stick and eventually into the back of the Bruins net. Lecavalier would find himself as the beneficiary of the fortunate bounce and take a Voracek feed for a slam dunk goal to tie the game with 24.1 seconds remaining.

The Flyers would take the game to a shootout, where they would eventually fall two goals to one.