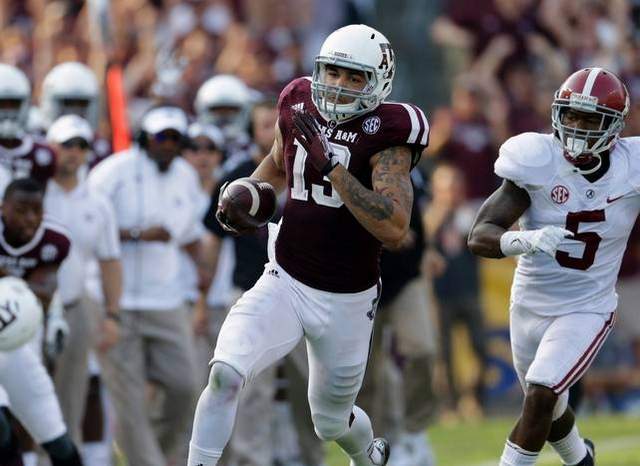 Mike Evans is widely regarded as the top WR in May's NFL draft and will have an audience with Eagles head coach Chip Kelly at his Pro Day Thursday. (Image via The Courier Post)

Kelly and the Eagles brass met with Manziel during the NFL scouting combine in February, but many viewed that as a cursory visit for the coach who very nearly landed the 2012 Heisman Trophy winning quarterback at Oregon.

This time around Evans and Manziel will be the only participants in the workout.

It is interesting that Kelly plans on watching Manziel throw passes as the Eagles are on the verge of inking backup quarterback Mark Sanchez pending a physical later today and at Wednesday's coaches breakfast during the NFL Owners meetings, Kelly affirmed the team's commitment to Nick Foles.

Although the Eagles only have six picks in May's NFL draft, the apple of Kelly's eye very well could be the 6'5" deep threat at receiver, Evans.

In addition to Evans' pro day Thursday the Eagles plan on using one of their official draft visits on Evans. In all likelihood a trade to move up in the draft would be required for the Eagles to come away with the receiver who posted 1,394 yards and 12 touchdowns last season while being widely regarded as the best receiver in a draft that is loaded at the position.

One thing is certain though, Kelly knows the value of spending time at these workouts.

"You get a chance to visit with him and talk to him, see him in different settings," Kelly said. "And then also visit and talk with their coaches and trainers and other people that have been around the young man for four, five years. I think sometimes when you really analyze what goes on at the combine, that’s kind of difficult for those guys. They’re thrown in for three straight days and they’re marching around in their underwear, people are staring at them, poking and prodding at them, asking a million questions. You get a 15-minute interview as your chance to talk to them.

"I think sometimes when you can get ‘em back onto their campus and get a chance to see them in their environment, you get a better understanding of what they’re like as a player and a better feel for kind of who they are. So when you’re making your decisions, you’re making educated decisions, not just going, ‘What about this guy? I don’t know. I never met him.’ It’d be really tough for me to weigh in and say, ‘We’ve gotta draft this guy…’ and jump on the table for him. Based on what? I watched six games and somebody in a report said he was a good kid? I’d rather be a little bit more hands-on where I can weigh in when we’re having those discussions about the draft of how I feel about the player. But it’s hard for me to weigh in if I’ve never seen him or talked to him."