DeSean Jackson Reportedly Has A "Done Deal" With Washington Redskins 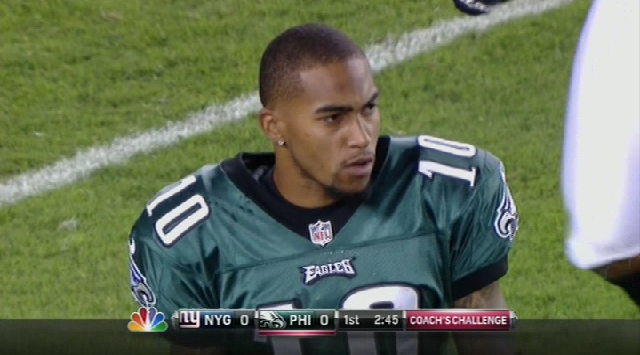 Former Philadelphia Eagles receive DeSean Jackson has not been a free agent for very long.   As many as nine teams were reportedly interested, but Jackson visited his very first team today.  Could Jackson already have a deal in place?   Tim McManus of 97.5 the Fanatic is reporting that Jackson and the Redskins have a "done deal".

Have had a couple people tell me that talks between Jackson's side and Redskins have been going very well. My guess is he signs there.

Then this evening McManus reported that the two sides had a deal in place:

Said a source close to Jackson on Redskins: "Done deal."

While this was Jackson's first free agent stop, the Redskins may have had some recruiting help even before Jackson traveled from Los Angeles to Washington.

TMZ reported that Redskins quarter back Robert Griffin III met with Jackson for a sales pitch back in Los Angeles before Jackson left:

Looks like the Redskins are serious about DeSean Jackson -- 'cause TMZ Sports has learned the WR hung out with RG3 in L.A. this weekend BEFORE he got on a plane to meet with the team in D.C.

Could Jackson have been happy enough with the meeting to not even meet with other teams?

It may be a little puzzling that Jackson would be willing to sign a deal so fast, not even giving other teams an opportunity to meet with him.  If Jackson signs with the Redskins, one thing is clear:  he will have plenty of opportunities to make the Eagles regret letting him go.

Dianna Marie Russini of NBC Washington reports that while the deal is not "done", Jackson's agent is sticking around:

Per sources VERY close to DeSean Jackson. Its not a done deal. His agent is expected to stay through tomorrow to talk. #Redskins

Of course, Jackson's agent would not stay without good reason.  The deal could very well be close.