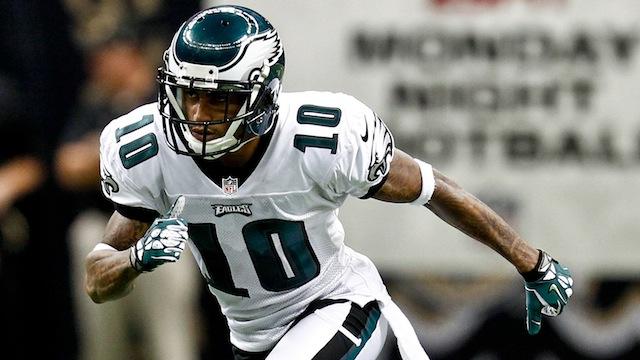 The Eagles have been silent when it comes to rampant speculation about DeSean Jackson's status with the team in recent weeks.

DeSean Jackson's status with the Eagles and the surrounding speculation has become the biggest story of the NFL offseason.

And that's just the way the Eagles want it.

If this were the media driven story that many fans believe it to be, Howie Roseman, Chip Kelly and company would be shouting from the top of Lincoln Financial Field's Headhouse Plaza for all to hear that Jackson wasn't going anywhere.

At Kelly's first opportunity to address the situation and plug the dam of speculation, rather than address the question head on, the head coach offered a joke about where on the team's priority list Jackson currently lies. For those paying attention over the past 15 months, a clever quip is Kelly's way of sidestepping a question he has zero interest in entertaining with an answer.

Just an aside- re-signing Riley Cooper and Jeremy Maclin were such priorities that the Eagles wrapped up those deals before free agency opened- while quelling speculation around Jackson simply hasn't been addressed.

This isn't a new story being cultivated by the football writers of Philadelphia, either.

Jump into the way-back-machine to last summer when Kelly was forced to have a sit-down with Jackson over the fact that the receiver was miffed to be running with the second and third teams in practice, when in reality it was intended to be a wake up call for not learning the various positions in the offense that the head coach required everyone do.

Even further in the not-so distant past, Jackson admitted to not having his head in the game for the entirety of the 2011 season when he was dissatisfied with his contract.

It's becoming painfully obvious that Kelly and the Eagles have grown tired of Jackson's act and with one of the deepest receiver draft classes in memory in front of them, it shouldn't be suprising that the team reportedly is taking offers for Jackson.

Further, it shouldn't be shocking that a third-round draft choice may be the best offer the Eagles can garner for Jackson who is not known to make catches in traffic, is under six feet tall and is hesitant to go over the middle, and who has already logged 93 brutal NFL games in his career.

Which goes to show the obstacles that the Eagles will have in moving Jackson, even before you take into account his $12.5 million cap number in 2013, which is already reportedly an obstacle for one team that has been mentioned to be in the Jackson sweepstakes.

"I wouldn't put much stock in the Panthers DeSean Jackson rumors," Joe Persons who covers the Panthers for the Charlotte Observer tweeted Thursday. "Unless Jackson is willing to take a pay cut, it's not happening."

The Jets, Patriots, 49ers and Raiders have all been mentioned as having interest in Jackson, but presumably, the price tag will be a factor with all three of those situations.

Regardless, by how the Eagles have handled this situation they have now generated interest in Jackson, which is exactly what they've wanted all along.