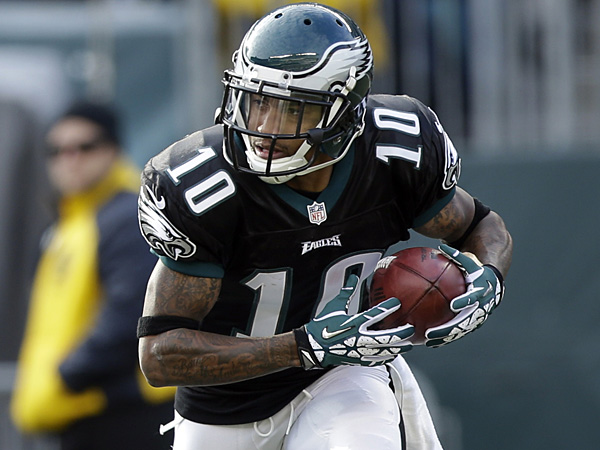 Three days after his release by the Eagles, DeSean Jackson will begin his free agency tour with a visit to the Washington Redskins, monday. (Image courtesy of Philly.com)

DeSean Jackson will begin his free agency tour today with a visit to the Washington Redskins, but if he leaves the nation's capitol without a contract, he may find few other possible landing spots.

Redskins owner Daniel Snyder is expected to make a strong push to ink Jackson during his visit, however, many of the teams initially thought to have interest in Jackson have quickly dropped out of the sweepstakes.

Andy Reid and the Kansas City Chiefs were initially thought to be a landing spot for Jackson after the former Eagles head coach drafted Jackson in the second-round in 2008 and signed him to an extension in 2011.

However, the NFL Network reported over the weekend that Reid and the Chiefs did due diligence on Jackson and are no longer interested in the enigmatic wide receiver.

It is unclear how much of the Chiefs turning their attention away from Jackson is due to the team's lack of cap space (approximately $6 million currently) or concerns over the details of Friday's NJ.com story that linked Jackson to friends who are purported members of the Crips LA street gang.

However, a league source confirms that Reid told the Eagles two weeks ago that he had "zero interest" in trading for Jackson when the team was shopping him earlier this month.

If Kansas City's concerns are chiefly financial, it would be easy to pro-rate Jackson's signing bonus, release a player or ask a player to restructure his deal to accommodate adding Jackson, if Reid truly believes that he is a game-breaking receiver.

That could very well be the concern.

While Jackson posted a career year in 2013, his first under head coach Chip Kelly, his inconsistencies that have dogged the California product his entire career remained present.

In a playoff loss to the Saints, Jackson caught just three passes for 53 yards and was a non-factor as the Eagles offense stalled in the first half. Against teams with a better than .500 record (eight games), Jackson posted just 28 receptions for 483 yards and two touchdowns while feasting on below .500 teams to the tune of 51 receptions for 849 yards and seven touchdowns.

From a purely football perspective, Jackson carries enough baggage before any of the off-the-field potentially disastrous consequences are considered.

Meanwhile, other teams appear to be shying away as well.

New York Jets owner Woody Johnson expressed interest in Jackson during the NFL owners meetings last week in Orlando in spite of the three-time Pro Bowler still being under contract with the Eagles at the time. However, general manager John Idzik has gone on record of saying that he has no interest in adding Jackson.

Meanwhile, if Jackson leaves Washington without a contract, both the Raiders and Bills could be legitimate landing spots.

Jackson made his interest in joining the Raiders known even before he was released by the Eagles.