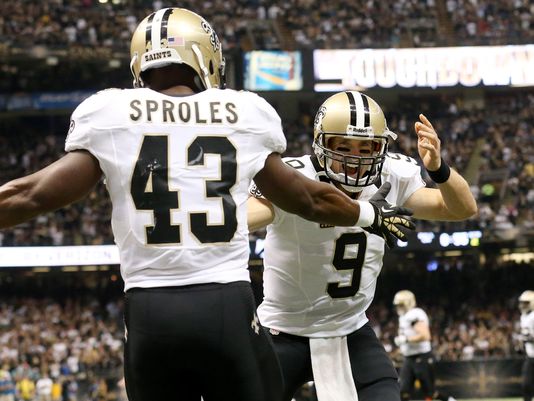 Darren Sproles is a "once in a lifetime player" according to Saints quarterback Drew Brees.

Drew Brees owns a Super Bowl ring and is headed to the Pro Football Hall of Fame five years after his career comes to a close, and the New Orleans Saints quarterback certainly hasn't lost sight of the players around him that helped him reach that level of success.

Monday Brees expressed his disappointment in Saints management dealing away one of his playmakers on offense, Darren Sproles, last week to the Eagles.

"I think a Darren Sproles only comes around once in your lifetime, in my career and in everybody's career," Brees told FOX Sports and USA Today Sports at the NFL Players Association player rep meetings. "There may be another one 15, 20 years from now. But there's not many guys like Darren Sproles. He's a special player, he's a special person, he's a special teammate. I'm lucky to have had the chance to play with him on two teams — '05 in San Diego when we drafted him in the (fourth) round and three years in New Orleans.

Sproles of course was one of the key cogs in the Saints' offensive machine in recent years, carrying the ball 188 times for 1,067 yards and five touchdowns in three years in New Orleans, but having a more significant impact through the air where the 30-year old caught 232 passes for 1,931 yards and 16 touchdowns.

In Philadelphia Sproles will likely be a jack of all trades both as a runner out of the backfield, receiver and returner.

The Eagles were so keen on acquiring Sproles that upon trading a fifth-round draft choice for him, extended the Kansas State product to a two-year extension.

Additionally, it seems adding the speed Sproles brings to the table has made DeSean Jackson expendable, or at least trade-able.

There certainly is plenty of reason to be excited about the opportunities Sproles creates not only for himself but the other weapons on the field in Chip Kelly's offense, but one thing is for sure, Brees understands the value that he brought to the table in one of the most dynamic offenses league-wide in recent years.