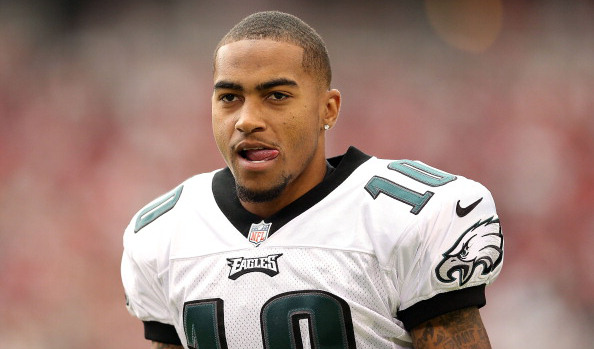 DeSean Jackson has been a hot topic at the NFL's owners meetings in Orlando. (Image courtesy of JimRome.com)

Howie Roseman had a chance to debunk the rampant speculation that the Eagles are ready to move on from DeSean Jackson, and chose not to Monday at the NFL owners meetings in Orlando.

"He's still under contract," Roseman told the assembled media. "For us, until there's anything to report on our players, that's where we are."

It appears the Eagles have arrived at the owners meetings ready to work on a trade to move Jackson, a three-time Pro Bowl wide receiver coming off his strongest statistical season.

"I haven't read any of the speculation, all the reports about everything," Roseman said. "I'm trying to keep my head down at this point, enjoy my family a little bit, and I obviously know there's a lot of speculation that's giong on, but for us, any conversations we have with teams, about teams, I think it serves well, with the relationships we have with them, to keep those conversations private."

That sort of conversation is clearly defined as tampering in the NFL, but the Eagles front office doesn't seem in any rush to squelch it.

Meanwhile, The Eagles seem to be turning their attention to the receivers in the draft, which is a likely impetus to the team's ratcheted up attempts to move on from Jackson who has already logged 93 games and at age 27 could be entering the latter stages of his prime while carrying a $12.5 million cap number this season.

Names such as Kelvin Benjamin, Mike Evans, Sammy Watkins, Allen Robinson and Brandin Cooks all will be available in what is said to be the deepest receiver draft class in decades.

While there is no new concrete news to report, it seems that with each passing hour and day that it's becoming evident that Jackson's exit from Philadelphia is coming much sooner rather than later.