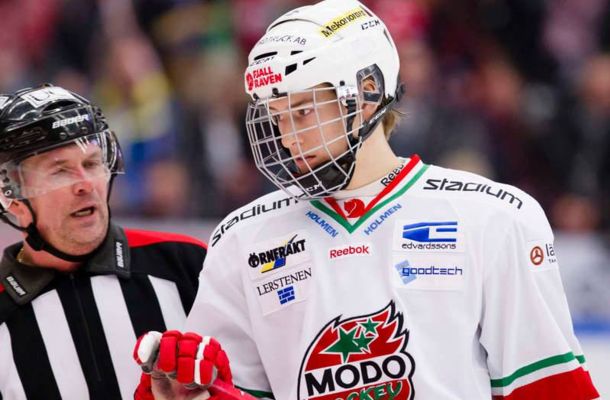 Image courtesy of LastWordOnSports.com
According to the Swedish website Aftonbladet.se, the Philadelphia Flyers and defenseman Robert Hagg have agreed to terms on an entry-level contract, which will most likely begin in the 2014-2015 season. The 19-year-old defenseman just recently finished his season with MODO HK in the Swedish Hockey League, or SHL, where the team was knocked out in the early stages of the postseason.

Hagg was drafted 41st overall by the Orange and Black in the second round of the 2013 NHL Entry Draft. At 6’2” and 207 pounds, Hagg is considered a valuable two-way defender that can be relied on for both adequate power-play time and penalty-killing time. The young blue liner had one goal, five assists, and 47 PIMs in 50 games with MODO HK in the SHL, which is Sweden’s most competitive ice hockey league. Hagg also had a goal and six assists in eight games with MODO J20 in Sweden’s J20 SuperElit league this season.

Early last week it was rumored that the Flyers, as well as Hagg, wanted the young prospect to join Brynas IF, also in the SHL, so the blue liner would have a more expanded role than he did with MODO HK. “It has been good, but I have not quite got the ice time I want” Hagg stated, according to Aftonbladet.se.

The d-man will report to Philadelphia on Monday and will most likely play the rest of the season with the Adirondack Phantoms, who will have 12 games remaining after the three they take part in this weekend. With the signing of Samuel Morin in September, who inked a three-year entry-level contract where he will earn $925,000 each season, Philadelphia has locked up their top two picks from the most recent draft.