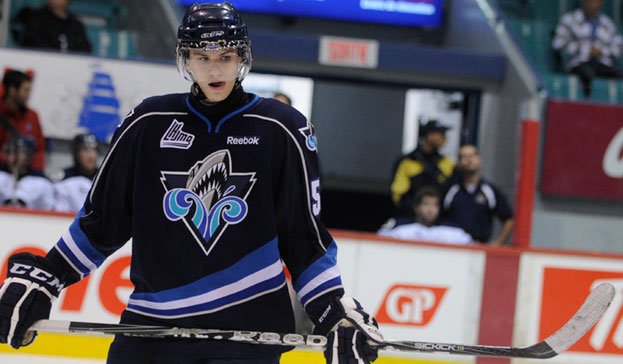 Image courtesy of TheQNews.net
When it comes to news regarding the Philadelphia Flyers’ prospects, there are several intriguing headlines, as Samuel Morin’s QMJHL team just can’t lose and several prospects prepare for the postseason. Philadelphia’s prospect pool shrank this week, as Matt Mangene was dealt to the New York Islanders in the deal that brought Andrew MacDonald to the Flyers. Unfortunately in the AHL, the Adirondack Phantoms suffered a shellacking from the Providence Bruins this weekend.

Morin and Rimouski Oceanic have won 14 straight games in the QMJHL, as they haven’t lost since a 6-4 loss to the Shawnigan Cataractes on February 1st. Thanks to the winning streak, Rimouski Oceanic now sits just two points behind Baie-Comeau Drakkar for first in the QMJHL’s East Division. Morin has taken part in 13 of the 14 wins for Rimouski Oceanic, as he missed the first game of the winning streak due to a suspension. The Flyers’ first-round pick in 2013 has one goal and six assists during the streak, as well as a plus-14 rating with 20 PIMs.

Although Morin and the other Flyers’ prospects who play in the OHL, WHL, and QMJHL are almost to the postseason, a few prospects in the NCAA will endure the postseason this week. The trio of Shayne Gostisbehere, Nick Luukko, and Reece Willcox will be taking part in even more intense hockey come later this week.

Gostisbehere and his Union College teammates will be taking on Dartmouth in a best-of-three ECAC Hockey Quarterfinals. Union College will host all three of the games, as the teams will meet on March 14th, 15th, and 16th at Messa Rink.

Luukko and the University of Vermont Catamounts will have games on the same days as Union College, as they take on UMass Lowell. Unfortunately for Luukko and his teammates, they will be on the road for the entirety of the three-game series.

As for Mangene, he made his Bridgeport Sound Tigers’ debut this week, as he was minus-1 in the team’s 3-2 overtime loss to the St. John’s IceCaps on Saturday. Mangene is an undrafted right winger who joined the Adirondack Phantoms late in the 2011-2012 campaign. After splitting time between the Phantoms and Trenton Titans of the ECHL last season, Mangene had six points in 51 games with the Phantoms this season before being dealt to the New York Islanders’ organization.

After recently ending a lengthy eight-game losing streak, the Phantoms are in the midst of a three-game losing streak that most recently saw Adirondack drop a 9-3 decision to the Providence Bruins on Sunday. Seth Griffith had a four-goal game and five-point night for the Bruins, while Alexander Khokhlachev had four assists in a five-point evening as well. Tyler Randell had two goals and two assists for Providence in the monstrous win, as the Bruins were up 9-1 at one point in the third period. Both Derek Mathers and Steven Delisle recorded their first goals of the season in the rout.