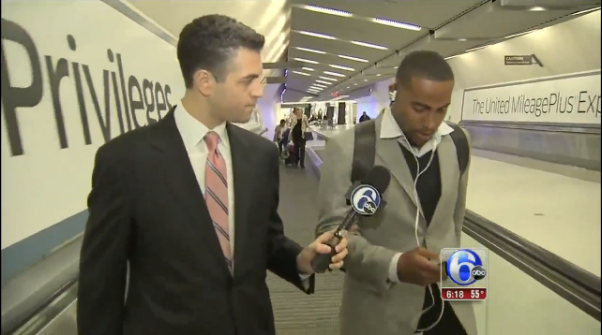 Aside from the statement released by former Eagles wide receiver DeSean Jackson after his release, the free agent has yet to speak publicly.  Heading to the airport after meeting with the Washington Redskins, a host of reporters chased Jackson down looking for a comment.  Jackson, however, had little to say.

Channel 6 Action News boasted an "exclusive interview" in which Jeff Skversky of WPVI asks Jackson some questions while he was getting his iPhone ready to listen to some music.

As for the fans, Jackson felt that his supporters would keep supporting him and that he had no animosity toward Philadelphia or the Eagles.   "No comment", Jackson told Skversky when he asked Jackson about his alleged gang-related ties.

In terms of Washington's reporters, Jackson addressed finding a new team, as seen on CSN Washington:

"It's my agent's job, that's why I have an agent," Jackson said. "I'm excited about everything right now. It's a new beginning, new chances."

Jackson was asked if playing the Eagles twice a season would be something he looked forward to by CSN Washington's Chick Hernandez, and Jackson did not seem too phased.   Dianna Marie Russini of NBC Washington asked Jackson, "What's alluring about the Redskins?", but Jackson did not respond to the question.

Jackson reportedly has interest from as many as nine teams.