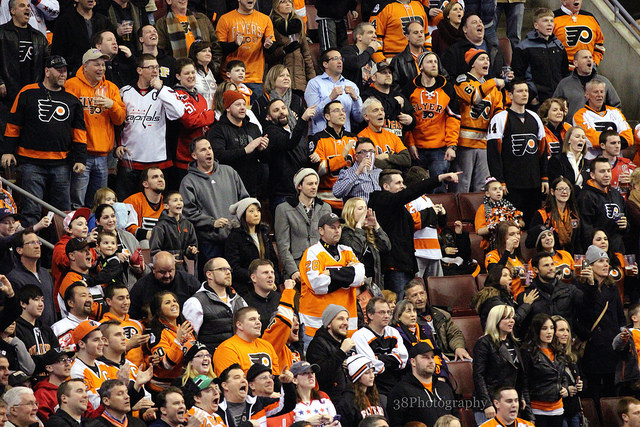 Back when it looked like this season was going the way of the early 90s Flyers, or that team that John Stevens had to save with the power of sheet cake, the Flyers’ PR department formed a plan. When your season is going badly, the best thing you can do to get butts in the seats is a whole bunch of wacky giveaways. It works in the minor leagues, and it would have worked for the Flyers. Thankfully, they never had to open the super secret locker containing these plans. However, my sources in the Wells Fargo Center have provided me with the details on some of these proposed giveaways.

The Flyers were going to create animal personas for some of their most beloved players. Kids eat that stuff up.

Get it, because Ray Emery likes boxing and beat the crap out of Braden Holtby that one time.

Defenseman Hal Gill hangs out with you during the game, as you pound giant beers and try and make all that hockey pain go away.

Celebrate Kimmo Timonen’s final (but probably not) season in the NHL with some dietary supplement!

Free dentures for the first 5,000 fans in honor of the Flyers’ toothless defensive stalwart. Freemasons get in for an even greater discount than the one they already get. Other benefits include a special edition orange and black #35 shirsey with the Freemason logo, along with a meet and greet with Flyers goalie Steve Mason. Mason has requested membership, but would prefer to avoid the Unblinking Eye. Secretly controlling the world has never been more fun!

Here comes the Wayne Train! Children 14 and under can annoy the ever loving crap out of their friends and family with this special train whistle shaped like Wayne Simmonds’ stick.

(Editor's Note: It was brought to our attention that the #HartnellDown people have already produced the Wayne Simmonds Train Whistle. Great minds and all that. Stick tap to @KellyDaBunny)

Pretend your best friend is Eric Lindros or Claude Giroux and strip them of the captaincy! Fun for the whole family.