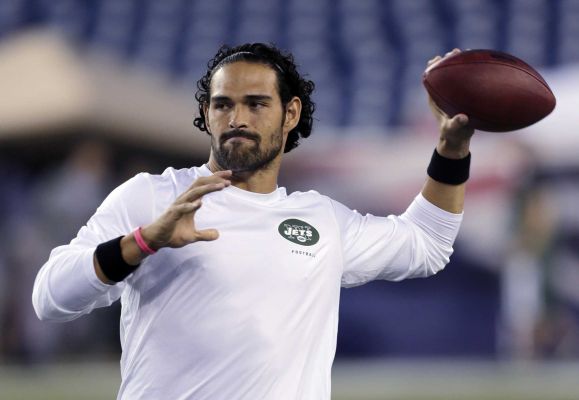 The Philadelphia Eagles search for a veteran backup quarterback has come to an end after adding Mark Sanchez. (Image via Newsday)

Mark Sanchez is officially a member of the Philadelphia Eagles after passing a physical with the team earlier in the day, an official announcement from the team is expected soon according to Ian Rappaport.

Sanchez missed all of last season as a member of the Jets with a shoulder injury that helped contribute to limited interest on the open market after New York released him Monday, officially because of a failed physical but in reality because the team inked Michael Vick last Friday.

“I think Mark is a very, very good athlete,”  Kelly said Wednesday at the owners' meetings in Orlando. “He’s started 60-some-odd games in this league. He’s got good experience. He has a lot of positive qualities.”

Sanchez, 27, started 62 games for the Jets and has won four playoff games. His 94.3 postseason passer rating is ninth-highest in NFL history.

The USC product owns a 33-29 regular season record and led the Jets to back-to-back AFC championship game berths in 2009 and 2010.

In all likelihood Sanchez will be the Foles' primary backup but could face competition for that spot with fellow former Trojan Matt Barkley, whom the Eagles chose in the fourth round of last year's NFL draft.

“It’s a position of need for us," Kelly said. "We played three quarterbacks last year. I don’t think you can look at your roster and say, 'Hey, we’re good at quarterback.'"

Clearly Sanchez was the best remaining free agent/veteran quarterback remaining on the market and alleviates the Eagles' need to take a quarterback in May's draft for depth purposes.