Eagles Flyers Phillies Sixers About Us Write For Us
Opening Day: Cliff Lee Starts To Kick Off 2014 Season Against Rangers
Around the Net March 31, 2014: Flyers lose in OT against Bruins; look to rebound in St.Louis

Morning After: Same result, but Flyers have come far 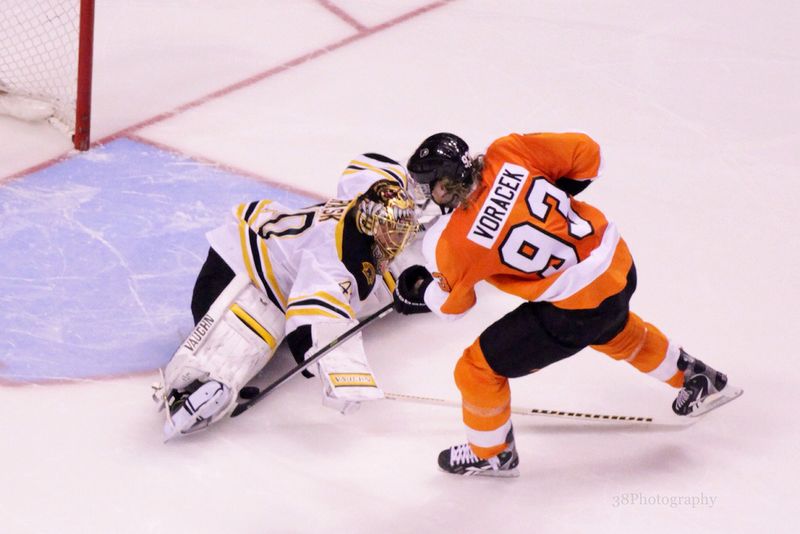 Tuukka Rask makes one of his four saves in the shootout, stopping Jake Voracek. The Bruins beat the Flyers in a shootout, 4-3, on Sunday. (Photo by Amy Irvin/38Photography)

If you were nervous about how the Flyers would perform against the NHL's best on Sunday, you weren't alone. The last time the two teams had met, the Flyers were crushed, 6-1.

That of course did start the Flyers playoff push, as their recent success has all but guaranteed them a playoff spot in eight more games.

The result was the same on Sunday - as the Boston Bruins prevailed, 4-3, in a shootout - but the Flyers showed just how far they had come from that January blowout.

"I thought our team competed real hard," head coach Craig Berube said. "They had an attitude today that they were going to go and show themselves and I thought that they did. I know the outcome wasn’t what we wanted but we attacked and had a lot of pucks on net. We competed hard. You’ve got to compete real hard against that team or you’re in trouble."

The Flyers couldn't have asked for a better start. Vincent Lecavalier seems revitalized after his demotion to the fourth line. His first goal just over five minutes into the game was his 400th career goal.

Lecavalier also was in the right place at the right time in the closing seconds of the third. Jake Voracek's hard work in front of Tuukka Rask and Zdeno Chara helped him find Lecavalier with a wide-open net.

"I’ve played with a lot of players in my career. I can tell guys are hungry," Lecavalier said "It doesn’t matter, some games are down 3-0 or whatever the score is, and they just keep coming. We keep rolling. We keep going. It shows the character in this room and I think it has helped us a lot this year."

If not for the shootout, the Flyers would have liked been rewarded with the outcome they were looking for. Rask was impressive, stopping 49 of 52 shots in 65 minutes and four of five in the shootout.

In both cases, the difference was in net. The Flyers needed Steve Mason to stand tall several times in the third to keep the Bruins lead at one. Ultimately, the Flyers were able to tie the game late.

Rask also did his part. For the Flyers to fire off 52 shots on one of the NHL's best defenses is impressive. Rask was flat-out phenomenal.

"We got a lot of shots and a lot of opportunities. Rask made some really key saves for them," Lecavalier said. "We’re happy with that one point. We would have liked to get that second one, but we’ve got some big games coming up and every point’s important."

"We battled hard to get that point," Scott Hartnell said. "And you never know – that point could be the difference between home ice and not."

The third period was a microcosm of the Flyers week. On Monday against the Kings, they were frantic at the finish, but couldn't score to even the score. On Wednesday, the Flyers didn't appear interested against the team they will most likely face in the first round of the playoffs. On Friday, they rebounded with a win against a struggling Toronto team. And on Sunday, they nearly pulled off a win against the NHL's best.

Insert the Flyers effort on Sunday into any playoff game. You will win a series. You may even win two. The Flyers certainly realize that.

"I think the guys worked extremely hard," Mason said. "We had over 50 shots on net. It shows the kind of pressure we were putting on them for the majority of the game. Right now they're the number-one team in the league, and the guys were going toe-to-toe with them.  It’s a good sign."

The Flyers hit the road to face the top team in the Western Conference, the St. Louis Blues, on Tuesday night.