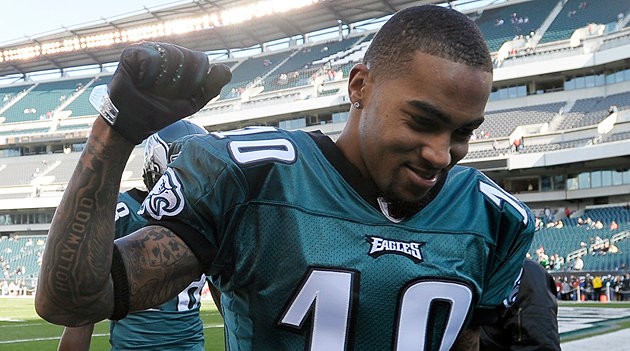 Eagles wide receiver DeSean Jackson's name has been mentioned in trade rumors over the past several weeks and reports suggest that the team may actually be listening to offers.

DeSean Jackson trade rumors have been circulating for the past several weeks but they seem to be intensifying.

A report surfaced via Derrick Gunn of Comcast Sportsnet Tuesday that the Eagles may not be actively shopping Jackson, but that they are intently listening to offers.

Per Gunn's source, the Eagles have set the value at minimum of a third-round draft choice in May's draft, if not a player as well.

Under Chip Kelly for the first time, Jackson finished with a career-best 1,332 yards last season, ranking ninth among NFL receivers.

Kelly had the opportunity to endorse Jackson during an appearance at the Maxwell Awards over the weekend and chose not to.

“[Jackson] is a player at receiver before Maclin behind Cooper. Or is it Cooper before Maclin?” Kelly joked, completely avoiding the question. “Or Maclin before Cooper? So I’ll check what you write then I’ll tell you what we feel about him.”

The Eagles may find some difficulty in actually moving Jackson because of his $10.5 million cap number and diva like attitude that at times bleeds over to the sidelines on game day.

Given the depth of receivers in the draft class it's no surprise that the Eagles could be trying to move Jackson, but the market may be limited for a sub 6'0 receiver with his cap number and off the field attitude.