Who is Kevin Goumas? 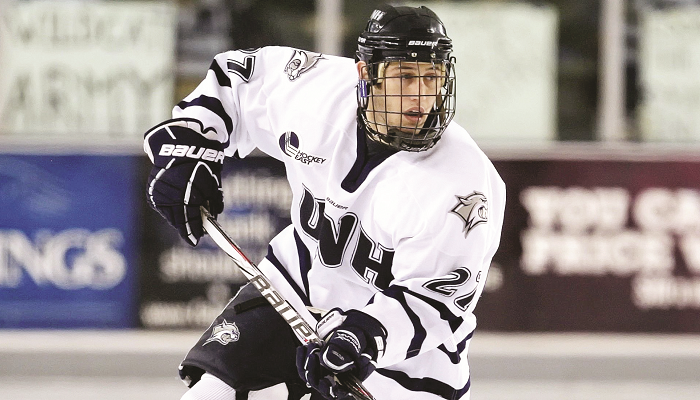 Image courtesy of AlongTheBoards.com
After it was initially reported by Travis Hughes from Broad Street Hockey two days ago, the Adirondack Phantoms reported yesterday that they have signed forward Kevin Goumas to a minor-league contract. Goumas will be with the Phantoms for the remainder of the season on an amateur tryout contract. He averaged over a point-per-game this season at a respectable collegiate program, but who exactly is Goumas?

A Lake Worth, Florida native, Goumas is an undrafted 22-year-old left winger. He racked up 58 points in 30 games with Canterbury School in New Milford, Connecticut during the 2008-2009 season. The following season, Goumas joined the Indiana Ice of the United States Hockey League, or USHL, for one year. Helping the Ice reach the semifinals in the postseason, Goumas finished the regular season tied for fourth on the team with 41 points in 59 games and tied for sixth on the team in postseason scoring with 5 points in nine games.

Following his stints with Canterbury School and the Indiana Ice, Goumas joined the University of New Hampshire at the beginning of the 2010-2011 season and it’s where he’s played each of the last four season including this year. In the 146 games he played for UNH, Goumas’ point production increased each season, as he finished as exactly a point-per-game player with 146 points in his college tenure.

After finishing ninth on the team with 18 points in 32 games in 2010-2011 and third on the team with 34 points in 36 games in 2011-2012, Goumas led the Wildcats in scoring in each of the last two seasons. The forward posted 94 points in 78 games over his last two seasons at UNH, which comes to an average of 1.21 points-per-game. According to Hughes of Broad Street Hockey, Goumas finished sixth in scoring nationally across the NCAA, as well as third in Hockey East. Considering the two players he finished behind in Hockey East are Hobey Baker Award favorites Johnny Gaudreau and Kevin Hayes from Boston College, Goumas’ numbers are pretty incredible.

Despite his impressive numbers, one point of concern for Goumas might be his size. According to Elite Prospects, Goumas is 5’10” and 161 pounds. It’s not so much Goumas’ height, as there have been 31 players that are 5’10” and have taken part in NHL games this season according to NHL.com, it’s more about the forward’s weight. Out of all the skaters to take part in at least one NHL game this season, only three players weigh 161 pounds or less: Joakim Nordstrom of the Chicago Blackhawks, Calle Jarnkrok of the Nashville Predators, and Paul Byron of the Calgary Flames. Out of the three aforementioned players, Byron is the only player who can be considered a regular, as he has taken part in 42 of the Flames’ 73 games this year scoring 18 points while averaging 14:15 of ice time per game. Fortunately for Goumas, weight, unlike height, is something you can add with certain dietary and physical actions. Considering players like Tyler Ennis, Zac Rinaldo, Teuvo Teravainen, and David Desharnais are 170 pounds or less, the forward’s size may not be as big a problem as expected.

Both Goumas and Robert Hagg, the Flyers’ second-round pick in the 2013 NHL Entry Draft, could be making their Phantoms’ debut this weekend, as Adirondack has games at Syracuse against the Crunch on Friday and at home on Saturday against the Springfield Falcons.