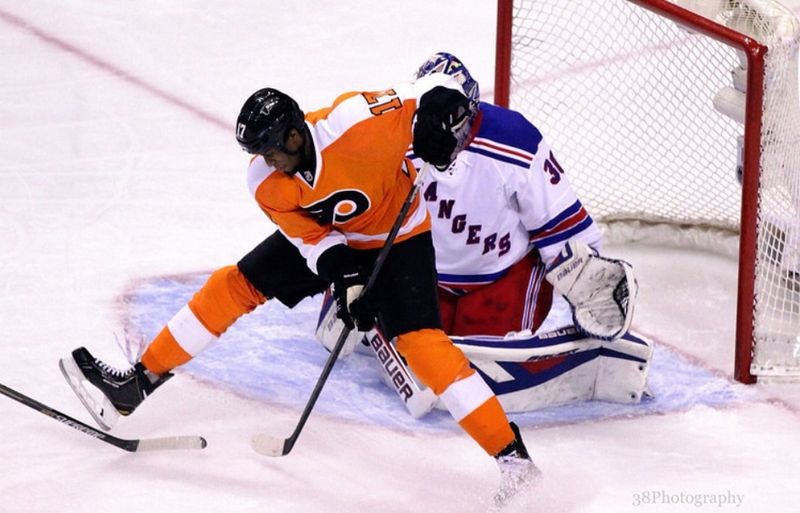 In a back-and-forth series, it comes down to tonight for the Philadelphia Flyers, as they visit the New York Rangers at Madison Square Garden for Game 7. The Rangers have won all the odd-numbered games so far in the series while the Flyers have won all the even-numbered games. In the final game of the series, can the Orange and Black win their second game in as many days at a place they have only won once since February of 2011?

Wayne Simmonds and Steve Mason led the way for the Flyers yesterday, as Simmonds potted a hat trick and Mason stopped 34 shots in the 5-2 victory. Although two of Simmonds' three goals came on the power play, the changes in Craig Berube's lines proved to be effective. With Scott Hartnell joining Brayden Schenn and Simmonds while Michael Raffl joined Claude Giroux and Jakub Voracek, the second line of Hartnell/Schenn/Simmonds were finally able to dictate play at even strength. The first line may have struggled a bit, according to advanced statistics, but it also helped limiting Vincent Lecavalier's ice time. With these two top lines, keeping the impactful third line intact, and putting Lecavalier on the fourth line, Berube seems to have found the best lines possible for his forward group.

Another big aspect of tonight's game will be the fatigue of Mason. It is a Game 7, so naturally every player will be prepared for the game. However, Mason is working the back end of a back-to-back following a night where he faced 34 shots. Unless the Flyers come out and dominate at even strength for the first time in the series, Mason will once again face a ton of shots, which may become a bigger problem than it usually is if the game is tied late or goes into overtime. In the opposing net, Henrik Lundqvist sat out the third period after he saw a total of 23 shots. With the Rangers' defense in front of him and one less period of play in the last two days, fatigue shouldn't be an issue for Lundqvist.

On the Flyers' blue line, Erik Gustafsson made an impact in his first postseason game of the season. With Nicklas Grossmann out after surgery and Hal Gill providing a poor showing in the Flyers' Game 5 loss, Gustafsson had his chance to show why he should be a regular on the blue line. Not only did he score, Gustafsson had the fifth-best Corsi for percentage on the team last night, meaning he was the fifth-best player out of the 18 skaters the Flyers dressed last night in terms of providing offensive pressure. A mobile option with offensive-upside is a nice change of pace from the Flyers' defense, which is why Gustafsson hopefully stays out of Berube's doghouse and stays in the lineup.

As for tonight's game, all that matters is a win. It doesn't matter if Mason has the best game of his career or the Flyers pull out an unusual high-scoring game, the only thing that matters tonight is a win. If the Orange and Black come away with a victory tonight, it is on to another hated division rival, while a loss tonight may provide several questions about the team in general. If Philly comes out on the wrong side of tonight's decision, Berube may face some questions about decisions earlier in the series, such as starting Ray Emery in Game 3 or dressing Gill in Game 5. A loss may also provide much bigger changes within the franchise, such as Paul Holmgren being removed as the team's GM. Obviously, a lot rides on tonight's outcome because it is a Game 7, but it will be interesting to see what changes are made in the organization if the Rangers' win tonight.

On the ice, it will be key for the Flyers' to follow the format that has worked in their three wins so far, which is strong goaltending, surviving at five-on-five play, and dominating special teams' play. New York is definitely the much better five-on-five team, so is the Flyers can make the game scoreless at five-on-five, or even just lose the even-strength battle 1-0, the Orange and Black have a good chance to win.

Along with the future of the organization after tonight's outcome, a lot can be decided with Mason's reputation if he comes up huge this evening. Many people feel Mason is the answer in net for the Flyers, while others say he isn't the man for the job and his contract is too much. Inconsistency and soft goals are a big reason for Mason's questioners, as can be seen in this series alone. To go with his amazing performances in Game 4 and Game 6, Mason didn't play too well in Game 5. If the former Columbus Blue Jacket can win tonight, or better yet single-handedly carry the Orange and Black to victory, one would have to think many of the questions surrounding Mason could be answered.

The upcoming schedule is either a series against the Pittsburgh Penguins or the beginning of the offseason. We will find out later tonight.