Eagles Flyers Phillies Sixers About Us Write For Us
Flyers Live To Play Another Day; Game Seven Tomorrow
Free Agent Profile: LeBron to Philly?? Not as Crazy as it Sounds 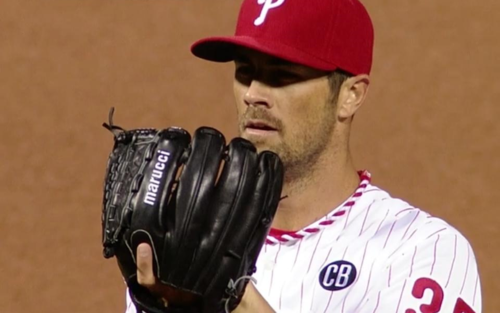 After a strong 6-4 road trip out West, the Phillies (13-13) returned home to welcome the second place New York Mets (15-11) into town for a short two-game set. Unfortunately, things didn't go as planned as Cole Hamels battled control problems and the Phillies bats were silent. The Mets took this one, 6-1.

The Game: Things would remain scoreless into the third inning. Ruben Tejada led off the inning with a double to left. After Hamels retired the next two hitters, he fell behind Daniel Murphy. Murphy was waiting for the changeup and ripped it into right for a single to bring home Tejada. 1-0 Mets.

The Mets would add to that lead in the fourth. Hamels got David Wright to fly out to lead the inning off, then the Phillies lefty gave free passes to both Chris Young and Curtis Granderson. Hamels looked to be struggling with his pitch grip again against Josh Satin, falling behind 3-0. Cole battled back to make it a full count but his next fastball caught too much of the plate as Satin smacked an RBI single to center field to extend New York's lead to 2-0. Cole got Travis d'Arnaud swinging for the second but walked Ruben Tejada to lead the bases. Up next was the pitcher, Jonathan Niese and Hamels walked him, allowing the Mets to add another run, 3-0. The Mets sent eight men to the plate and Cole Hamels pitch count was at 75 going into the bottom of the fourth.

Did we mention the Phillies were hitless? That didn't last much longer. In the bottom of the fourth, Marlon Byrd launched a solo shot against his former team to give the Phillies their first hit and run of the game, cutting the lead to two at 3-1.

The Mets got that run back and more in the fifth though. Daniel Murphy singled to lead off the inning. Murphy stole second base and later scored on a Chris Young RBI double to right center. 4-1 Mets. With Hamels spot up third the next half inning, Sandberg opted to stick with the lefty even after Cole loaded the bases. He wouldn't last much longer as Ruben Tejada hit an RBI single back up the middle to score two more, giving the Mets a 6-1 lead. Roberto Hernandez was called upon to replace Hamels and got the final out.

Hamels final line wasn't pretty. He went just 4 2/3 innings, gave up six runs on eight hits while striking out three. He also walked five. The Phillies bullpen shut down the Mets offense for the rest of the game.

Impact: Obviously, we were all hoping to see more out of Cole Hamels tonight. After the third inning, his control got worse and base-runners began to pile up. The Mets haven't been his favorite team to face though. Hamels entered the game with a 4.44 career ERA against them. He has an 8.33 ERA in his last six starts against the Mets at Citizens Bank Park as well. The offense was underwhelming to say the least, though they hit the ball hard..just right at the defense. The Phils couldn't get to Mets starter Jonathan Niese, who had little issues getting through the Phillies lineup.

Bullpen Report: Roberto Hernandez relieved Hamels in the fourth and retired the only better he faced. We got to see some more of Mario Hollands in this one as he retired all six batters he faced. He threw strikes, his fastball had plenty of life to it and that resulted in him fanning two Mets hitters. Jeff Manship threw just four pitches to retire the Mets in the eighth. Shawn Camp pitched a scoreless ninth.