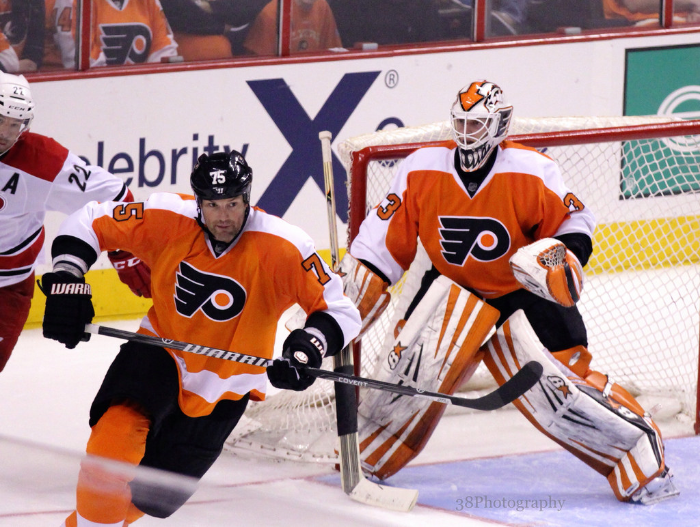 It's not a stretch to say that Hal Gill's play cost the Flyers the game on Sunday afternoon. Gill was on the ice for the Rangers' 2nd and 3rd goals that effectively buried the Flyers at 3-0 in the second period, and both came directly following miscues from Gill. On the second Rangers goal, Gill whiffed on a glorious scoring chance that could have (and should have) knotted the score at 1.

Shortly thereafter, the Rangers had an odd-man rush and Gill went down too early, leaving Brad Richards wide open to deposit a rebound to double the New York lead. Later in the period, Braydon Coburn played a puck into Gill's skates and he lumbered around like a dancing bear trying to find it, only to have Dominic Moore swoop in and blow by him en route to giving the Rangers a 3-0 lead. Gill was abysmal yesterday, and you won't hear too many arguments from fans about that.

And yet, there were plenty of Flyers beat writers who thought that Gill was the right choice to play over Erik Gustafsson in the wake of Nicklas Grossmann's injury before the game. Even more incredibly, these same beat writers continued to defend the decision even after Gill's horrific outing. These people are wrong. Erik Gustafsson was, is, and will continue to be light years better than Hal Gill for the Flyers and for any hockey team by any statistical measure, and Craig Berube's decision to dress Hal Gill instead might end up being the final nail in the Flyers' coffin this season.

So these numbers definitely favor Gustafsson, though they're not overwhelming and Gill's 47.6% CF% was better than both Nicklas Grossmann and Andrew MacDonald. But perhaps you're not a fan of Corsi. How about scoring chances, right? Fairly straightforward?

The sample size of 6 games for Gill in the regular season was too small to draw any meaningful conclusions with regards to scoring chances, but they painted an eye-opening picture for Erik Gustafsson's play. Gus was on the ice for 16.2 Flyers scoring chances per 60 minutes, good for 3rd among Flyers defensemen behind Mark Streit and Kimmo Timonen. This would seem to fit into the narrative that the Flyers and many traditional analysts believe about Gus: he's a good offensive defenseman who can't play defense well enough to consistently crack the lineup. However, his 14.2 scoring chances against per 60 minutes was 2nd-best among Flyers defensemen behind only Timonen. His scoring chances for% was 53.3%, again better than every Flyers D besides Timonen.

Even if you hold true to the belief that Gus is suspect in his own end, he's preventing scoring chances against better than every Flyers defender not named Kimmo Timonen. This would seem to indicate that he's doing a fine job of acquitting himself in the defensive zone.

This graphic from @BobRbrts illustrates how the Flyers have been better with Gustafsson in the lineup. The Flyers have been getting victimized by the Rangers' speed all series long. A sizeable chunk of New York's goals in these first 5 games have seen them utilize their strong skating against the Flyers' slow, vulnerable defense. So after losing one of their slowest defenders in Nicklas Grossmann, the Flyers opted to go with Gill, whose skating ability could be generously described as "lumbering" and less generously described as "unbelievably slow" over Gustafsson, who is up there with Coburn as the best skating blueliners the Flyers have.

Another strength for the Rangers has been their ability to forecheck the Flyers and keep the puck in the offensive zone for extended periods of time. Gill's lack of passing ability only exacerbates this problem, while Gustafsson's far superior puck movement would greatly improve the Flyers' breakouts from their defensive zone.

In addition, Gustafsson recorded 2 goals and 8 assists in 31 games played this year while Gill failed to record a point in 6 games. Gustafsson's 0.88 points per 60 minutes played at even-strength was second among Flyers defensemen behind only Mark Streit.

So Why Was Hal Gill In The Lineup?

There were a few reasons cited for Gill's inclusion in the Flyers' Game 5 lineup over Gustafsson, including his experience (0 goals in 111 playoff games) and shot-blocking ability (no blocked shots yesterday, although blocking shots means you don't have possession of the puck and can be a very misleading statistic-see Andrew MacDonald). But by far the one I saw cited most frequently was the Flyers' unwillingness to break up the 3rd pairing of Andrew MacDonald and Luke Schenn.

According to this school of thought, MacDonald has "stabilized" the 3rd pairing. In fact, depending on who you listen to, "the strength of the Flyers' defense is a third pair that Andrew MacDonald has made as good as the first pair". That's a real sentence that was legitimately typed. By this line of logic, a 2nd pairing of Mark Streit and Erik Gustafsson would have been far too small in stature, and thus Gill was the necessary choice.

And yet, the numbers simply refuse to back that up. Luke Schenn's CF% with Erik Gustafsson is 48.1%, while it is only 47.2% with Andrew MacDonald. Schenn's CF% away from MacDonald is 47.8% as opposed to 47.5% away from Gus, indicating that he performs better apart from MacDonald. At best, you can say that MacDonald has been relatively equal to Gustafsson as a partner for Schenn. But to believe that MacDonald has made his pairing with Schenn "as good as the first pair" of Timonen-Coburn (and to give MacDonald $30M over 6 years, which is a discussion best saved for another time) is sheer lunacy and requires ignoring all the statistics to illustrate the truth, which is quite to the contrary.

What Should The Flyers Do?

There's no doubt that Erik Gustafsson should be in the lineup tomorrow night instead of Hal Gill. But how should the defense pairings be organized? It's an extremely small sample size (only 74:34), but MacDonald and Streit have a 58.5% CF% together this season. Would it kill the Flyers to try MacDonald with Streit (who has arguably been the Flyers' best defenseman this series) and put Gustafsson back with Schenn. Splitting up MacDonald and Schenn in this scenario gives the Flyers one of their precious shot blockers on each pairing that they seemingly so desperately crave.

As you can see, playing Hal Gill over Erik Gustafsson Sunday afternoon was illogical and indefensivle in every way, shape, and form. Gustafsson is a better skater, passer, offensive threat, drives possession better, and holds his own defensively. Whether the Flyers put Gus in for Game 6 remains to be seen (though many seem to think they will), but the fact of the matter is that Gill's inclusion in the Game 5 lineup was a horrific mistake and may be one of the deciding factors in the Flyers' season ending in the first round.

View All Posts By Stephane Hardinger

View All Posts By Stephane Hardinger