Eagles Flyers Phillies Sixers About Us Write For Us
Phillies Take on the Mets in a Rare Five Game Series
NBA Draft Profile: Joel Embiid 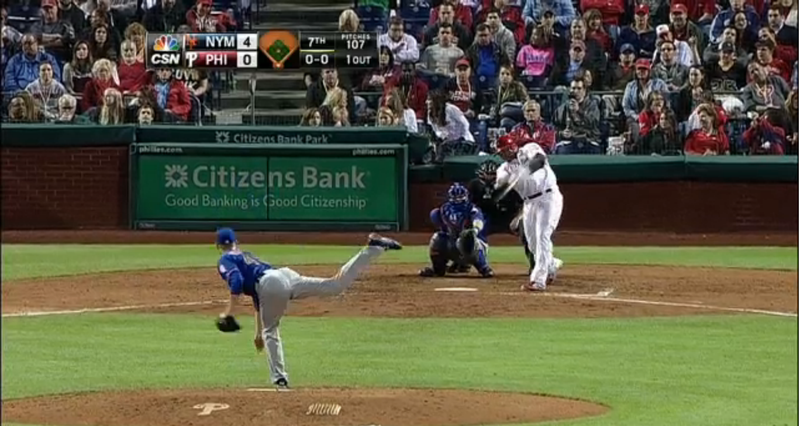 David Buchanan pitched into the seventh and Marlon Byrd homered for the Phillies, but the team was unable to overcome a strong pitching performance by Zach Wheeler and the Mets, who won the first game of a five-game series 4-1 Thursday night.

The Game: Buchanan was solid initially, working around a two-out single by David Wright to record a scoreless first. In the bottom of the inning, Ben Revere led off with a single and stole second after Jimmy Rollins struck out looking. However, Wheeler managed avoid trouble by getting Chase Utley looking for the second out before punching out Ryan Howard to end the inning.

In the second, Lucas Duda reached first on a bunt hit just in front of the plate, and Chris Young followed up with a single to left. Wilmer Flores then tapped a weakly hit ball just past the mound that Cesar Hernandez couldn’t quite handle, loading the bases for Travis D’Arnaud. D’Arnaud grounded into a double play, though Duda scored to give the Mets the early 1-0 lead. The Phillies, meanwhile, wasted another opportunity with men on in the second, when they stranded Carlos Ruiz at second after the catcher’s 11th double of the season.

In the fourth, Curtis Granderson walked to lead off the inning. After Duda’s flyout to center, Young turned on a Buchanan slider for a two-run homer that pushed New York’s lead to three. The home run was Young’s second of the season.

In the fifth, Wheeler collected his first hit of the season to lead things off for the Mets. Juan Lagares hit a playable ball to Hernandez at third, but the young infielder was unable to make the play on this one either as Lagares reached on an E5. With two men on and one out, David Wright grounded into a fielder’s choice to Hernandez. Hernandez threw to second, but the throw was not in time, loading the bases for a second time. Buchanan walked Granderson, forcing a run to score, but escaped the inning without any further damage. Buchanan pitched into the seventh before being lifted for Mario Hollands, who struck out the veteran outfielder to end the inning.

Wheeler, meanwhile, continued to stifle the Phillies hitters over the next few innings. The Phillies managed just four hits out of the young flamethrower, who struck out nine over 6.1 innings. The Mets allowed Wheeler to start the seventh with a high pitch count, but he was removed after just one out when Marlon Byrd deposited the righty’s 108th pitch into the right field seats to make it 4-1. The Phillies couldn’t capitalize on the momentum, though, as New York’s relievers managed to retire the next five batters straight.

In the ninth, Justin De Fratus relieved Hollands, who pitched 1.1 innings  of scoreless relief. De Fratus got pinch-hitter and longtime Phillie Bobby Abreu to ground out to first before allowing a Lagares single to right. The Phillies pulled De Fratus in favor of Antonio Bastardo, a day after his four-walk outing against the Rockies. As if on cue, Bastardo walked Murphy to put men on first and second, though Wright would ground into a double play to end the threat, keeping the Phillies within striking distance entering the bottom of the ninth. Jenrry Mejia came in for New York, and struck out both Rollins and Utley looking before Howard went down swinging to end the game. Final score: 4-1 Mets.

Impact: The Phillies offense and defense were very disappointing. Buchanan wasn’t exactly flawless, but the defense behind him didn’t do him many favors, and he showed good composure in working out of two bases loaded jams with minimal damage. However, he’s going to need to show some better command to offset his lack of strikeout stuff, as he has only registered four punch-outs in 11.2 innings so far.  The Phillies’ hitters, on the other hand, rarely challenged Wheeler, who walked none and allowed just four hits. He retired 14 in a row before allowing Byrd’s solo home run in the seventh. The Phillies as a team struck out 15 times as a team. They will need to be more patient and make pitchers work if they are going to turn things around, especially in a series that has such major consequences in the division standings.

Up Next: The Phillies will host the Mets again tomorrow for the second game of the five-game set. A.J Burnett (3-4, 3.51 ) will take the hill against the Mets and right-hander Rafael Montero (0-2, 4.96). Montero lost his last outing despite striking out 10 over six innings of two-hit ball, while Burnett gave up six runs in seven innings against Los Angeles as the Phillies were no-hit by Josh Beckett.