Draft: The Old School vs. The Hinkie School- Part 2 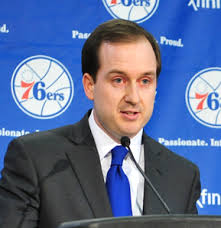 (Part two of a four-part series)

When I think of the old school, well, I think of  Will Farrell saying “ C’mon, we’re going streaking, up through the Quad, by the gymnasium” but for the purpose of this article, we’ll look at the Sixers drafting the best player available at each point in the draft, without making any moves. With the #3 pick, Jabari Parker. I know, I know, I just spent two paragraphs discussing how they are going to get Wiggins but I’m sorry, I don’t believe all of the rumors. I do think Embiid will be gone but I think Wiggins’ upside is too much to pass on if I’m Milwaukee. Still, Parker is a pretty great consolation prize. So with Parker in house, Brett Brown’s lineup will look like this: MCW, Wroten/Anderson, Parker, Young, Noel. If all these players are still on the team, and I doubt Young will be, there’s still a glaring need for a SG and a true PF. That leads us to pick #10; Sixers select James Young (SG/SF, Kentucky). I’d like Stauskus but I think he’s gone at this point, shooters are at a premium in today’s game and Stauskus is a good one. I also know that there has been a lot of talk about Dougie "McBuckets" McDermott but I also see him gone prior to the #10 pick. In Young, they still get a young player (18y/o) who has a sweet shooting touch. He’s also an above average, willing defender. Young can come off the bench to start his career and bring some scoring punch and eventually crack the lineup late in the year or certainly in 2015-2016. Plus, with Thad most likely gone, we’ll need to replenish our “Young” pool.

On to the Second round where picks are pretty much a crapshoot but with NBA average (26%) of second rounders playing more than 2years in the NBA, and contributing, the Sixers should get at least one player who will help long term. Pick #32, Cleanthony Early (SF, Wichita State). Early did show up for the NBA combine and according to most scouts, disappointed. I still rather look at the body of collegiate work and Early was one of the better players in the nation and played on a winning team. Early is a little older (23y/o) then you may want out of a “project” but he’s extremely athletic (40” vertical) and can fly up and down the court. He would look very nice as a rotational player in BB’s up tempo offense. Pick #39, Spencer Dinwiddie (PG/SG, Colorado). Dinwiddie is exactly the player the Sixers will be targeting in the 2nd round; he’s got amazing potential but coming off an ACL injury. We all know how willing they are to be patient with a player during a knee rehab, ahem, Noel. Dinwiddie is a 6’6” guard, he played mostly pg in college but has a nice scoring touch and the ability to score in bunches. He can back up MCW or they can be paired together giving them tremendous length in the backcourt. If he’s there at #39, it’s a no-brainer.  Pick #47, Melvin Ejim (SF/PF, Iowa State). I’ll be honest, I think this is around where Ejim will go but I’m hoping he lasts to this pick. I love Ejim’s game, his biggest issue will be what position will he defend; it’s most likely going to be the 4. At 6’6”, he is definitely a “tweener” much like Parker in that they’re probably too slow to guard the 3 and will probably be a liability down in the post. But Ejim is relentless on the offensive end, averaging almost 18pts/gm last year. He had a few games where he lit up the score sheet and that ability to score in waves is a tremendous asset out of a rotational player. In this draft scenario, the Sixers can fill up the basket with Parker and Ejim on the court at the same time but they’re not going to stop many people either, you’ll definitely want to take the over! Pick #52, Nikola Jokic (PF/C, Serbia). This is the point in the draft where you’re just hoping the player you take can be a 10-12 guy on your bench. Jokic is 6’11”, 255lbs with some shooting touch. He’s only 19 and will most likely want to play another year or two in the Adriatic League but that’s all fine and good for the Sixers. Maybe he can develop enough of an offensive game in the post that he can come over stateside and help right as the team is taking that next step. Pick #54, Markel Brown (SG, Oklahoma State). Brown is a streaky shooter who definitely needs to become more consistent. The upside here is his atheletism, he had the highest vertical of anyone at the combine, 43.5” which insane especially for someone who is 6’3”. With his athleticism and an improved jumper, he could eventually be a 10+pt a night guy off the bench.

Stayed Tuned, Part 3, The Hinkie School will be coming out in a day or two. Let me know if you think they should go Old School and stand pat and take the best players available.

Part 1 can be found here: