Eagles Flyers Phillies Sixers About Us Write For Us
NBA Draft Profile: Joel Embiid
Send Down Brown? 'Not at this Stage', Says Ruben...

NBA Draft: How I Learned to Stop Caring and Love the Uncertainty.

Having the first pick in the draft can be a blessing one year, a curse the next. While it’s true that you get first crack at the buffet of potential spread out before you, you also might have to be the one to find out that the shrimp has spoiled and, well don’t even go near that blue stuff. In fact, one might argue that in years with a crowd of players with comparable unknown potential, you might want to sit back, let a few other brave souls go over the wall first, then come in and clean up the stragglers. Take the 1984 draft: Hakeem was a nice safe first pick, but then the Bulls get Jordan after the Blazers jump on the Bowie grenade. It’s easy to poke fun in hindsight, but if the Bulls had picked second they might have taken Bowie as well. Almost twenty years later the Pistons fell on the Darko grenade, allowing the Nuggets, Raptors, and Heat to calmly pick franchise players without having to mentally contort over thoughts like “Sure we have no idea how good Darko is, but those frosted tips scream potential!” 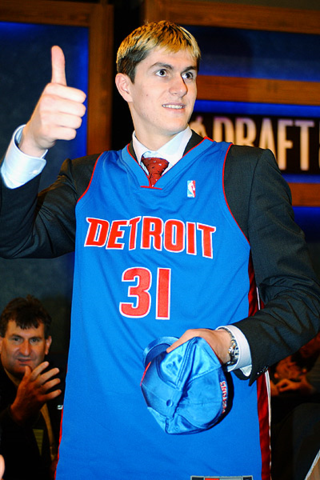 Even last years draft, generally perceived to be a sub-par crop of players, was so evenly sub-par that no one knew who to take first, leaving the door open to the Cavs talking themselves into Anthony Bennet (its early, but potential for worst 1st overall pick ever) while Nerlens Noel, the perceived #1 pick for most of the year, fell to 6th overall. And of course Oden and Durant might be the strongest example of the burden of the first pick.

So I posit that, in years where the talent at the top is bunched up and potential is hard to predict, best to let someone else walk through the door first. And that brings us to the 2014 NBA draft, where the Sixers find themselves in this exact situation. We’ve all read it over and over, that Embiid, Wiggins, and Parker are locks to be successful NBA players, maybe even cornerstone superstars, barring injury. While the Cavs have to stress over Embiid’s back, and the Bucks have to stress over who has more potential, the Sixers just have to sit back and take whoever is left. Easy. While I do think that Dante Exum deserves a little bit of thought at the 4th pick, in general I agree with what John Smallwood wrote the other day. The Sixers should keep it simple stupid, and just take whichever of the top three is still on the board.

In light of this, us Sixers fans are spending less time worrying about who is the best fit for our team and more wondering who the hell the Cavs and Bucks are going to pick. If you were to believe most of what has been written in the lead up to the lottery, the order is practically set! Wiggins, Embiid, then Parker. Go ahead and preorder your custom Parker Sixers jersey. The Sixers themselves put together a nice roundup of mock drafts, summarizing who was likely to go to us at #3. What they found:

The most common storyline all year has been that Parker will go third to the Sixers. Embiid and Wiggins have upside that is way too high to last past the first two picks, and hope and upside (Darko!) trump known quantities. Now that the draft order is set though, and people have to speak about these picks in more concrete terms, despite all the repetition (or maybe because of), this narrative is showing some cracks. Ryen Russillo (a completely underrated NBA voice that ESPN totally underutilizes) wrote a piece on Grantland recently in which he published anonymous unedited opinions from NBA scouts on the top three prospects, and it was clear that Wiggins was ranked 3rd for most of them. Here’s a taste:

Um, in general an “interesting kid?” Don’t you mean “BOW TO OUR LORD AND SAVIOR EMPEROR WIGGINS?” Chad Ford, ESPNs draft guru, wrote an Insider piece basically saying that it’s too close to call between the three of them, but the general theme was that Embiid has the best upside and Parker is having the best workouts, and, well Wiggins ….

There's a lot of misinformation floating around right now ... One good source told me that the Cavs have already told Wiggins' camp he's the front-runner. However, another trusted source with close access to the Cavs' front office told me that he believes that Wiggins isn't even in the discussion in Cleveland -- that it's already been narrowed down to Embiid or Parker.

And if Wiggins doesn't go No. 1? I don't think he's in the top two on the Milwaukee Bucks' board right now, which means he would fall to the Philadelphia 76ers -- a team that has had Wiggins as its top target all season.

This was followed yesterday by an online chat with Ford in which he guessed the top of the Cavs draft board is “1a. Embiid 1b. Parker 3. Exum 4. Wiggins.” Exum sighting!

So, is Wiggins the third best player? Is he destined to fall to us and should we, GASP, be unhappy about that? Do we actually want Parker and just not know it? As Socrates said (or was it Bill S. Preston Esq.), "The only true wisdom consists of knowing you know nothing." Here’s the point – the top of this draft is confusing, no one knows who whould go first, and we don’t have to play this unwinnable game of prognostication. The Cavs and the Bucks get to do the heavy lifting for us. We can pregame all we want and show up to the party drunk, cause we ain’t hosting and we know who is driving us home. The bottom line is we are getting an exciting player who may or may not work out for us in the long run. I believe we are in the ENVIABLE situation of not having to stress about who that player is. Instead, us Sixers fans should just sit back and enjoy the ride.

First??? Good work! You beat the rush 12 days after this was posted.