Eagles Flyers Phillies Sixers About Us Write For Us
Reid All About It: Phils Walk-Off in 14th on Brignac RBI Single
Phillies Lose in the 14th Inning After Forcing Extras in the Ninth 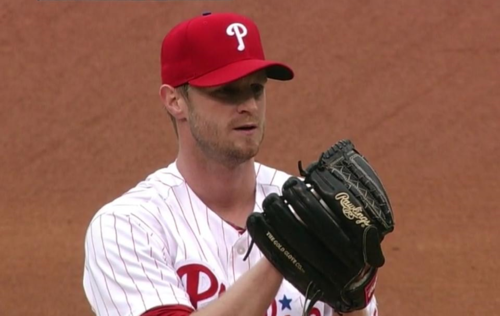 It took five hours and 23 minutes for the Phillies (24-28) to beat the Mets (25-29) last night/this morning. There won't be much time to rest up from it as the teams take the field for a 3:05PM matinee this afternoon. The Phillies bullpen was a big reason why the team won last night, but it was great to see a guy off of the lackluster bench be the difference maker. None other than Reid Brignac knocked in the winning run with an RBI single in the 14th inning to give Philadelphia a dramatic 6-5 win. With a lot of bullpen pitchers for each team being used yesterday, the Phils and Mets will rely heavily on their starters today to pitch deep into the game.

The Phillies will need a similar result from Kyle Kendrick (1-5, 4.04) this time out after he threw 6.2 shutout innings against Colorado on Memorial Day. After giving up 16 runs in his previous four starts this month, Kendrick held the Rockies bats at bay, pitching out of jams and stranding eight runners on base. He scattered six hits and walked four while striking out two. Kendrick has seen the Mets already this season, when the Phillies were in New York for a series earlier this month. He didn't factor into the decision in the Phillies 5-4 win after giving up four runs in 5.1 innings of work. In his career against the Mets, Kendrick is 8-8 with a 3.58 ERA.

New York will counter with rookie, Jacob deGrom (0-2, 1.83), who will be making his fourth start of the 2014 season. He pitched well his last time out, despite walking five hitters over 6.2 innings in a no-decision against the Pirates. The Mets have lost all three games by the rookie thus far, but he has thrown effectively for the most part. He went six innings against the Dodgers on Memorial Day, giving up just three runs to the potent Dodger offense. The Mets righty took the loss in a 1-0 game against the Yankees, when he made his debut. It was his best outing so far in his young career, giving up just one run over seven strong frames while striking out six.