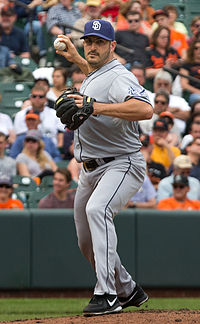 Two of the more significant flyers the Phillies have added to their organization in recent weeks made their respected debuts last night for the Lehigh Valley Iron Pigs against the Rochester Red Wings. Pitcher Jason Marquis was signed a few weeks ago and is on the mend from Tommy John Surgery. Grady Sizemore who fell out of favor with Boston was signed last week. As the trade deadline looms as well as team struggles, both could play a role with the major league club shortly.

Playing centerfield Sizemore went 1-4 with a lead off single in the first and was driven in by leftfielder Russ Canzler to give Lehigh Valley the early lead. He would later flash some defense with a diving grab robbing Rochester's James Beresford of a hit. Marquis made even more of a splash throwing six innings of one run ball, striking out six, walking one, and allowing just three hits.

Not so encouraging was Ethan Martin and Cesar Jimenez who got knocked around in the 8th and would surrender the lead and the game to Rochester in a 6-5 loss. Top prospect Maikel Franco also continues a tough season going 0-4 which leaves him with a .212 average for the season.

While it's the smallest of sample sizes, considering the horrid struggles of the Phillies outfield, it's tough not to see Sizemore in the picture somewhere if he continues showing signs that he can perform. Marquis has less of a clear path ahead but even he could see the big leagues in the event a starter is dealt (Cliff Lee) or injured (Cliff Lee).