Eagles Flyers Phillies Sixers About Us Write For Us
General Manager Ruben Amaro Jr.: Other GMs Fault Phillies Made No Deals
Eagles Camp 2014: Highlights and happenings from Day 6 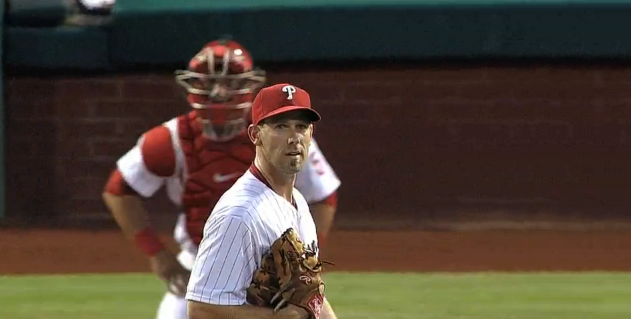 At the time of publication of this article, all members of the Phillies have not been traded.

At 4:00 PM ET, the trade deadline passed and no trades were by the Phillies. The Phillies are staying put after it was heavily insisted and rumored that they were going to enter a re-building phase. Tonight, as A.J. Burnett, Marlon Byrd, Cole Hamels and Cliff Lee put on their Phillies uniforms they will focus on the game on the field as they open up a four-game set against the Nationals. On the hill for the Phils will be Cliff Lee (4-5, 3.78 ERA) as he leads a team that is chocked-full of trade candidates against Gio Gonzalez (6-6, 3.56 ERA) and a Nationals team who has made some moves of their own today.

Cliff Lee has been a discussion of trade ever year since he re-signed with the Phillies in 2010. Despite spending the last month and a half on the DL, Lee was still talked about in possible deals that could send him to a contending team in return for top prospects. Lee is coming off of a no-decision against the D-backs last Saturday. Lee allowed three earned through five innings in his second start back from his DL stint. Lee still has another year (possible two if his option vests) under contract with the Phillies. As Lee continues to lead a Phillies team on the hill, only the front office can determine where he will be next season or even this season. In Lee's career against the Nationals, he is 6-4 with a 2.74 ERA.

Gio Gonzalez is leading a Nationals team in a pennant race in the NL East so no discussion of him being traded have come about. The Nationals have traded for SS Asdrubal Cabrera, however, for IF Zach Walters. Gonzalez is coming off a hard-luck loss against the Reds. Gonzalez allowed an earned run over seven innings while striking out eight. Gonzalez is hoping to put it into overdrive for the next three months as his team aims for a postseason spot. Gonzalez is 5-3 with a 2.48 ERA all time against the Phillies.

At the time of publication, Marlon Byrd is still a Phillie. The 36-year-old veteran signed a two-year deal with the Phillies last winter in an effort I continue his successful 2013 campaign. So far this year, Byrd has silenced the nay-sayers and has put himself on the radar for contending teams. In 106 games this year, Byrd is hitting .270 with 20 HR and 60 RBI.