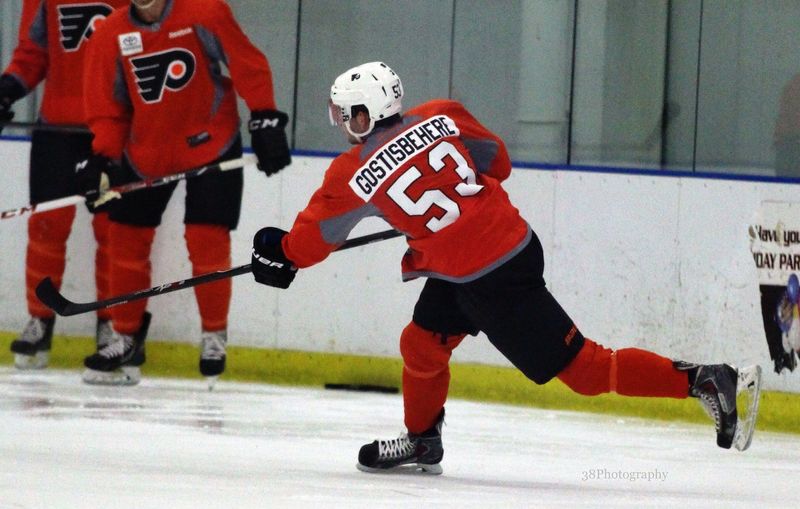 Defenseman Shayne Gostisbehere will likely start the season in the AHL as the Flyers most NHL-ready prospect. (Photo by Amy Irvin/38Photography)

The Flyers most recent development camp wrapped on Tuesday with many of the team's prospects, including the entire 2014 Draft class, participating.

One thing was evident throughout camp: the Flyers have a ton of young defensive depth. The future looks bright along the blue line, which makes it the Flyers most important development key moving forward.

The Flyers are always a hot ticket during the winter months and early spring. But the ticket fans should really be going after are not for hockey in Philadelphia but in Lehigh Valley.

These defensive prospects will play for the Phantoms as their development process continues. Chances are, some of them aren't that far off from making the jump to the NHL.

The Flyers most highly-touted defensive prospect is Shayne Gostisbehere. Flyers fans got an up-close look at the former Union College defenseman during the Frozen Four. Days after becoming a national champion, Gostisbehere signed an entry-level deal with the Flyers, joining the Phantoms for a pair of games at the end of the 2013-14 season.

"It was easily the best week of my life," Gostisbehere said. "It’s definitely been a world wind of a year, especially the end there."

The 21-year-old has received high praise from several people around him. Two include his college coach, Rick Bennett, and the coach he'll likely play for this season, Phantoms head coach Terry Murray.

"I played with Brian Leetch on the Rangers and Shayne reminds me of him in how Leetch could beat the first forechecker and sometimes the second just because of the way he could go east-west with his head up," Bennett said. "I think the sign of a good defenseman is if you can beat the first forechecker. It’s the sign of a great defenseman if you can beat two. Shayne’s has proved that in college."

"I coached Paul Coffey with the Flyers and Al Iafrate when I was coaching the Washington Capitals. Those guys played like Shayne does," Murray said. "They were up on the attack in the offensive zone and they had incredible speed to be able to track back literally like a forward to defend and pressure the puck carrier."

Gostisbehere obviously hopes to impress the Flyers enough to make the team following the preseason. But he understands that the Flyers will choose his path and let him develop at the AHL.

"Of course that’s my mindset," Gostisbehere said. "But the Flyers have a plan for me. I’m all ears. I’m a sponge. It’s a jump from college to the NHL or even the AHL. It’s a big jump. If it’s a year in the AHL or two years in the AHL, then that’s what it’s got to be."

His two coaches believe a year in the AHL will make the transition to the NHL smoother.

“If he fast tracks in the American League the way he did here, then it’s going to be hard to keep him down,” Bennett said.

"I think Shayne needs to play in the American League next season,” Murray said. “I think he needs to get a season of pro hockey under his belt and get a real good understanding of what it’s all about."

When you look at Morin, another defenseman with snarl and size comes to mind. He works on the Flyers development team in fact. That defenseman is Chris Pronger.

"People compare Sam to Chris Pronger, but there are a lot of steps to do before he gets there," Morin's coach at Rimouski, Serge Beausoleil said in an interview with NJ.com. "I think it would be very useful for him to play another year in the Q, but in time he will be a great player in the NHL. That's for sure."

Morin is a few steps away from the NHL, but an increase in size – another inch and 14 pounds – were noticeable.

Among some of the other players getting closer to the NHL, like Gostisbehere, are Gostisbehere's future teammates with the Phantoms. Robert Hagg signed an entry-level deal in March. Flyers seventh-round pick Jesper Petterson signed an entry-level deal immediately following camp. Flyers first-round pick in 2014, Travis Sanheim, was also one to watch.

Gostisbehere, Hagg and Petterson will all likely play for the Phantoms next season, being the first of a wave of defensive talent to make its way to the NHL.

Is there a chance a Gostisbehere or Hagg make it to the Flyers as early as September? Yes, there is. But Ron Hextall is quick to point out the path that these young players must take before playing at the highest level.

"Anyone who's coming in has to work their way in," Hextall said. "These kids are going to have to beat someone out of a job."