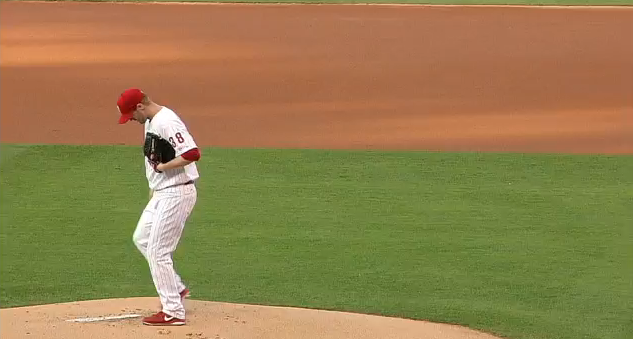 The Phillies pulled away from a four-game sweep yesterday as they secured a 2-1 win in the finale against the Giants. Cole Hamels notched his 5th win of the year as he pitched eight one-run innings whilst allowing 6 hits. Hamels dominated the Giants' offense who whiffed 10 times against the lefty. Jonathan Papelbon got his 24th save after blowing his previous two (in the same series) opportunities. The Phils will open up a three-game series with the Arizona D-backs (44-58) tonight as Kyle Kendrick (4-10, 4.87 ERA) and Wade Miley (6-6, 4.16 ERA) take the mound.

Kyle Kendrick struggled yet again his last time out. On Sunday Kendrick was lit up for 6 earned runs on five hits through five innings. Kendrick struggled in the first inning yet again, raising his first inning ERA to 10.80 as well as raising his season ERA to 4.87. In the month of July, Kendrick is 1-2 with a 7.71 ERA. Over his last three, Kendrick has allowed 18 earned runs in 16 2/3 innings. Kendrick will look to turn it around against the D-backs, a team he is winless against in his career.

Wade Miley has pitched effectively over his last four starts and has decreased his ERA by over 40 points (4.61 to 4.61). In three of those four starts (all are quality starts), Miley has struck out at least 7 hitters and has walked less than 3. In the month of July, Miley is 3-0 with a 1.88 ERA and has 29 Ks against 5 walks. As Miley looks for his fifth consecutive quality start, he will take on a Phillies lineup that has scored nine runs in their past three games. In two career starts against the Phils, Miley is 1-0 with a 2.25 ERA.