Eagles Flyers Phillies Sixers About Us Write For Us
Between the Pipes-10/31/14: Halloween edition! Flyers woes in Tampa continue;Colaiacovo signed to bolster defense corps
The Day After with Apter - Brown, Players on Loss to Bucks

Fear the Deer: Sixers lose to Bucks with 8 minute scoring drought in the 4th. 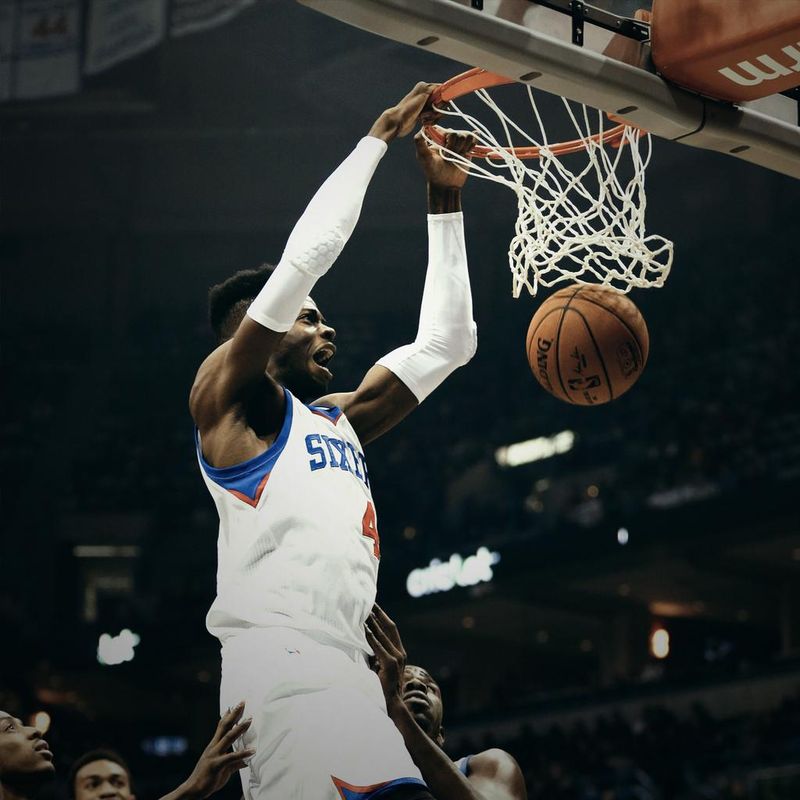 At the beginning of last season, the Sixers and the Bucks were perceived as two teams moving in opposite directions. The Sixers had just traded their franchise point guard Jrue Holiday, drafted McDubs and Nerlens, and signaled the onset of an epic tank job. The Bucks, coming off a 8th seed appearance in the playoffs, were full on “Fear the Deer” and had a hungry look in their eyes with the buffet that is the weak eastern conference laid out in front of them.

Funny how basketball works. A bad Larry Sanders night club moment and one fat OJ Mustmayostardayonaisse, and the Sixers, trying to lose as many games as they could, still couldn’t lose as many games as the Bucks accidentally did. Neither team changed their stripes in the draft though, as the Bucks took the most NBA ready player in Jabari Parker with an eye towards a return to respectability, while the Sixers took another red shirt player in Joel Embiid, content to tank another season and continue to collect assets.

Hard to say whose strategy is working better, but on this night the Bucks took advantage of an 8 minute, 0-14 drought from the 76ers coming down the stretch to win 93-81. Malik Rose proved prophetic early in the game, remarking “He was OJ Extra Mayo last year, but now he’s OJ Light Mayo this year.” A noticeably skinnier OJ Mayo was the difference maker tonight, scoring 25 points and hitting a couple back breaking threes during that horrible Sixers drought. Hollis Thompson led the Sixers with 15 pts, while Tony Wroten had 14 pts but also more TOs (8) than assists (6).

Just like the Bucks, the Sixers are mainly looking towards the future, and the future is now for Nerlens Noel. Noel had a nice game tonight, logging his first NBA double-double with 14pts, 10rebs, and 3 blocks. The first Bucks possession of the game was a microcosm of the good and bad on Noel. He bit badly on a pump fake from Larry Sanders, something he did with concerning frequency in the opener against Indiana on Wednesday. Nerlens needs to (and likely will) learn with time when to use his athleticism, and when to rein it in. However this possession ended in a block because Nerlens’ second jump after biting on the pump fake was so fast, he still got the rejection on Sanders. Dude is ATHLETIC. The Sixers switched a lot on pick and rolls with Nerlens, and not surprisingly so because he guarded everyone from Larry Sanders to Jabari Parker to Jared Dudley to Brandon Knight with decent efficiency. While Nerlens struggled with a plodding big man like Roy Hibbert on Wednesday, against a team like the Bucks who have more young, light, fast players, Nerlens seemed in his element. His length and ability to alter shots and clog passing lanes was evident tonight, and Sixers fans can leave tonight’s game feeling better about Noel than after Wednesday’s game.

Another bright spot was KJ McDaniels, who coming off the bench scored 12pts on a variety of 3s, put back dunks, and alley-oops. Oddly though, McDaniels scored those 12 pts in a paltry 13 minutes as Brett Brown stuck with the starters and Luc Mbah a Moute, recently returned from a trip to Cameroon to mourn the death of Joel Embiid’s brother. Brown said in his postgame presser that KJ didn’t play more because of a hip injury, although he was vague on the details. The Sixers are going to need more minutes from KJ, given his defensive presence (a league leader in blocks in the preseason) and 3pt shooting.

Ultimately this was a pretty exciting, close game that turned on the Sixers FG drought to end the game. Brown said afterward that the Sixers just don’t have a go-to scorer to break them out of a drought like that, and that’s especially true while McDubs is out. It’s possible at this point that the Sixers still don’t have a go-to scorere on the roster, period. But that’s what this period of tanking and self-exploration is about, to learn what we do and don’t have.

As of right now, we have some long athletic players who hustle and play defense. But we have very little offense and an 0-2 record.