Eagles Flyers Phillies Sixers About Us Write For Us
Game 23 Preview: Flyers Seek Revenge vs. Rangers
For Phillies' Ruben Amaro, Jr., Passing On Yasmany Tomas Is The Bigger Risk 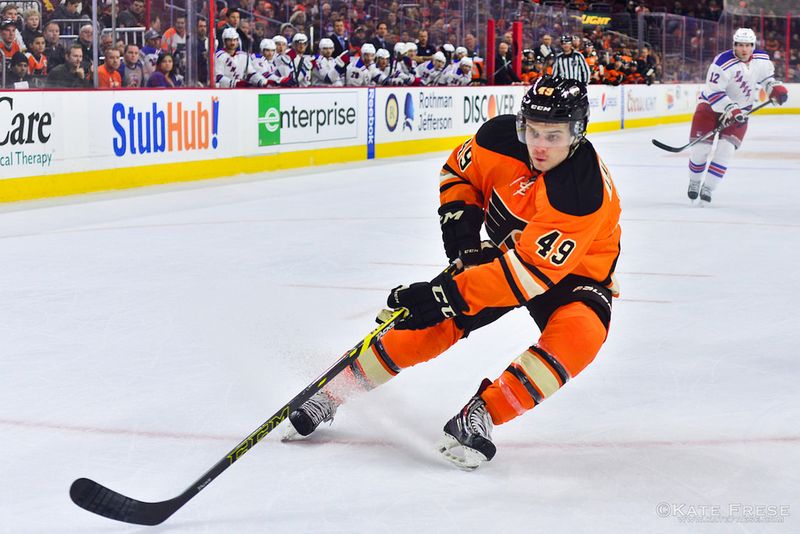 Scott Laughton continues to play well for the Philadelphia Flyers as his line was the lone bright spot in Friday’s loss. He is still seeking his first NHL point.

The Flyers wished Jason Akeson a happy Thanksgiving by placing him on waivers. He cleared on Friday and was sent to Lehigh Valley in time for Friday’s game for the Phantoms.

Injury News: Rob Zepp tweaked something prior to Wednesday’s game, a scheduled start for him. Luckily, he will only be out a week or so with a lower body injury. Anthony Stolarz started that game between the pipes and Lehigh Valley called up Martin Ouellette from Reading after the game.

The game on Thanksgiving Eve for the Phantoms left something to be desired. The Phantoms fell into a 1-0 hole after the first period and a 3-0 hole after two periods. They climbed back with two goals in the 3rd period but could not tie the game as they fell 3-2 to the Springfield Falcons. It was a rare home loss for the Phantoms.

Making the spot start, Stolarz stopped 31 of the 33 shots he faced in the loss.

With Jason Akeson in tow, the Phantoms and Albany Devils faced off in Atlantic City last night.

The Phantoms were held scoreless in the first period and trailed 3-0 at the first intermission. They received goals from Taylor Leier and Petr Straka in the 2nd period to make a game of it as they went into the second intermission down just one goal.

Unfortunately that was all she wrote for the Phantoms as the Devils iced the game with a goal late in the 3rd period.

The Phantoms will be back in action tonight at the PPL Center as they host the Norfolk Admirals.

The Royals also lost their Thanksgiving Eve game in a back and forth matchup, though they did pick up a point as they lost in a shootout. They were back in action Friday night as they beat the Greenville Road Warriors by a resounding 5 to 2. They will face the Road Warriors again tonight as they seek the two-game sweep.