Eagles Flyers Phillies Sixers About Us Write For Us
Previous month:
October 2014
Next month:
December 2014 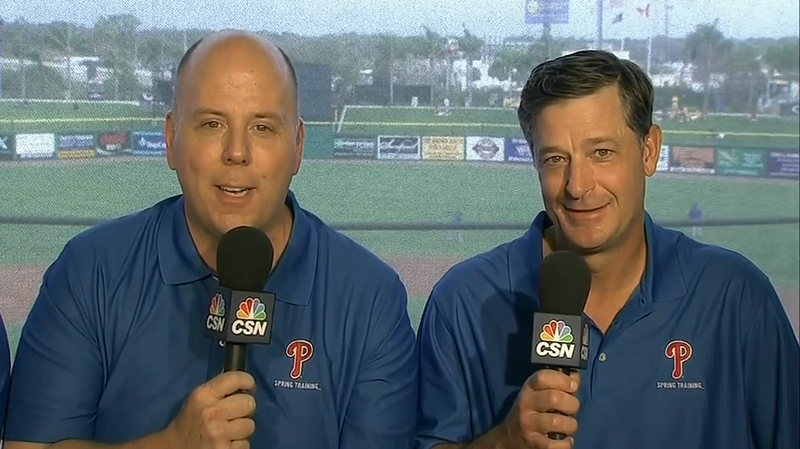 Via Jim Salisbury of CSN Philly, Moyer explained his departure:

“At the end of the Phillies' season, I gave the situation a great deal of thought, with my family in mind,” Moyer said. “I enjoyed my year behind the mic tremendously, and the opportunity to work with Tom, Matt, Mike and Gregg is one I will cherish.

“However, as we are now based on the West Coast, the geography presents unique challenges to the matter at hand. I thus reached a decision that, for the moment, it’s very difficult to balance a bicoastal professional life with family life at home.

“I thank Comcast SportsNet, the Phillies and, of course, the fans for letting me share my insights into the team this past season and wish the team success in the coming years.”

The report notes that the rest of the broadcast team would return for 2015. 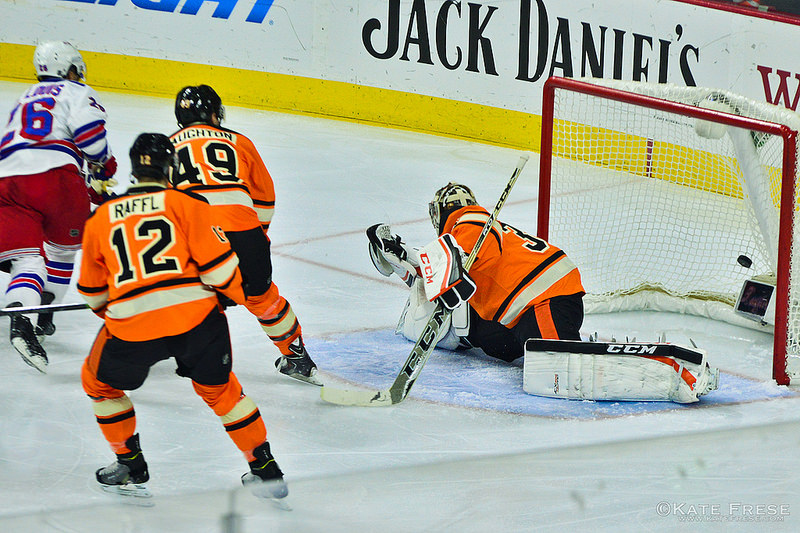 The annual Black Friday matinee was anything but a show. The Flyers played a very uninspired game, Dan Boyle, Martin St. Louis and Rick Nash all netted goals. Cam Talbot turned aside 26 shots and the New York Rangers shutout the Flyers once again 3-0 at the Wells Fargo Center.

The Eagles delivered another classic game against the Cowboys to add to the holiday festivities on Thursday. In addition, they helped solidify their place atop the NFC East, setting the stage for another meeting between the two teams in just 17 days.

But that was not before controlling the game in every aspect.

Here is this week's report card.

There are moments throughout the season where we learn something about a team that can change the course of the ultimate goal. When a team emerges victorious in a convincing fashion, it is a statement win.

That's what the Eagles delivered for Thanksgiving. Their 33-10 win in Dallas not only separated them from the Cowboys in the standings, but ultimately answered the one remaining question left regarding the NFC East.

This is still the Eagles division to lose. They proved it on Thursday.

The Philadelphia Flyers (8-10-3) will look to regroup at home today as they welcome the New York Rangers (9-8-4) to the Wells Fargo Center for the annual Black Friday game. This is the first game of a home and home with the Rangers. Game time is 1:00.

There were so many factors that went against the Eagles leading into Thursday's huge showdown with the Dallas Cowboys. A short week and a trip to Jerry's Palace after a win against the Titans just three days spelled trouble.

In a game that was built up with tons of excitement and high stakes, the Eagles did not disappoint.

Mark Sanchez and LeSean McCoy turned in their best games of the season while the defense stood tall in a 33-10 win over the Cowboys at AT&T Stadium in Arlington on Thanksgiving.

It's a holiday showdown in Dallas, and for the Eagles, there is so much more on the line than just to make Thanksgiving happier in Philadelphia.

The 8-3 Eagles meet the 8-3 Cowboys in a game that will finally separate the two teams in the NFC East. A win could be the key to winning the division in a few weeks. Whatever happens, it sets up a great precursor for the meeting between the two teams in Philadelphia just two weeks from now.

Kickoff of this holiday matchup is set for 4:30 p.m. from AT&T Stadium.

Any time the Eagles and Dallas Cowboys face off, you can expect a showdown usually with high stakes. Put the two together on Thanksgiving with first place in the division on the line, and you've got the next closest thing to the Super Bowl.

This is far more than a holiday for the Eagles, who need a win to hold the top spot in the division. They will have to do it against a strong Dallas team in Texas for the traditional Thanksgiving game. High stakes, high energy and a lot of excitement have made this game what it is.

Here are today's six keys to the game.

The Flyers turned in a second-period effort that would suit a last-place team. Steve Mason was the victim.

Craig Berube pulled the goalie that made 46 saves on Monday to keep his team in the game as Mason's teammates floundered in front of him again.

For Berube, the message was the same following Wednesday's 5-2 loss to the Detroit Red Wings as it was on Monday: the Flyers are not competing enough. 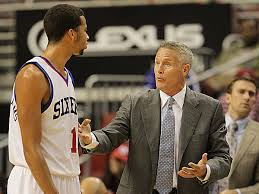 Wednesday night at the Wells Fargo Center displayed a different vibe right from the start as the Sixers welcomed in the 5-8 Brooklyn Nets to the city of brotherly love with the hopes of capturing their first win of the NBA season. The Nets came into the game losing six of their last seven games and struggling mightily, which led the Philadelphia fans to believe tonight could possibly be the night their team could crack the win column. The Sixers came into the game coming off hard fought, 114-104, loss to the Portland Trail Blazers, a team who is one of the hottest teams in the NBA at the moment. Recently, the Sixers have played in a bunch of competitive games leading them to believe they could steal one at home tonight from an aging Nets unit. Wednesday night at the Wells Fargo Center brought back the old Sixers game atmosphere. The crowd was into the game right from the tip and the place was going ballistic late in the fourth quarter of a tight game before Brooklyn quieted all hopes and left the arena with a 99-91 victory over the, still winless, Sixers.

Throughout the first quarter the Nets took all the hyped up energy out of the building and were leading fans to believe another blowout was on the horizon. Brooklyn jumped out early due to a poor offensive quarter from the Sixers, including yet another 0/5 start from the floor from last season NBA Rookie of the Year, Michael Carter-Williams. His struggles in the first quarter have been way too consistent in recent weeks and you are able to visibly watch his all of his confidence diminish in a matter of minutes. MCW presses entirely too much in the first quarter of games leading to ugly off-balance shots that are just desperate miracle heaves. On the other hand, the Nets shot the ball around 70 percent in the first quarter and were scorching shots from all angles. Everything was falling for them and the Sixers looked like a depleted unit after one quarter.

The second quarter was a much different story for Brooklyn as the Sixers defense turned up the intensity and started forcing poor shots along with turnovers. They gained back some momentum and crowd life during the quarter with their defensive efforts, with the help of rookie K.J McDaniel’s a starting position. The energy McDaniel’s provides to this team is like no other. He can come in at any moment and immediately create an impact on the game in some way. He was the SEC defensive player of the year for a reason and his offensive skillset is tremendously underrated. McDaniel’s seemed to be the lone bright spot of the first half for a Sixers team that was struggling in every category, but somehow only trailed by eight, 49-41 heading into the break.

The third quarter didn’t start exactly the way the Sixers wanted after gaining some momentum back towards the end of the second. Brooklyn began the third on a 9-0 run and extended their advantage to 17 points. More exciting play from K.J. McDaniel’s ignited the Sixers to get back into the affair and an alley-oop slam by McDaniel’s from Tony Wroten allowed the Sixers to begin their run about midway through the third. The dunk cut the Brooklyn lead to 11 and the score was now 67-56. This play was the spark lit under the Sixers leading them on a 13-5 run to end the third, resulting in a 72-67 Nets lead after three and the Wells Fargo Center was rocking.

The fourth quarter provided wonderful excitement that filled the Wells Fargo Center with more hope that this could be the night. The Sixers were forcing turnovers, looking up the court, getting easy buckets, and climbing their way back into the game. A MCW to Noel alley-oop slam capped a 6-0 Sixers run to start the fourth and the feeling couldn’t have been any better. The Sixers took the lead on a play where our two young prospects finally connected with each other and had the top blowing off at Wells Fargo. The game provided thrilling excitement throughout the fourth quarter until as Alan Anderson lead the Nets with 12 timely points during the fourth quarter. He was getting to the free-throw line and nailing free-throws left and right, putting a dagger in the Sixers hopes. A controversial off the ball foul in the crucial moments off the fourth quarter led to Michael Carter-Williams fouling out and ending his chances at leading his Sixers to their first win. The foul also gave Brooklyn two extra free-throws that depleted the Sixers chances. K.J. McDaniel’s received a good look from three-point range on a must score possession but bricked the shot and Brooklyn ran out the clock on the game.

This loss hurts as a Sixers fan. Knowing just how hard they’ve worked and how close this team came to winning their first game tonight has to set the young squad back a few steps. Coach Brett Brown has to tell his boys to forget this game and move on to the next opportunity on the schedule. Although it counts as another loss in the books, let’s look at this game as a building tool. Our team gave it all they had tonight and at this point that’s all you can really ask for. I don’t want to speak for everyone, but I think I’m speaking for most when I say this team is the most exciting 0-15 team to watch in the history of the NBA.