Eagles Flyers Phillies Sixers About Us Write For Us
Game Recap: Sixers Trounced by Warriors, 126-86.
Flyers Trivia: Who am I? 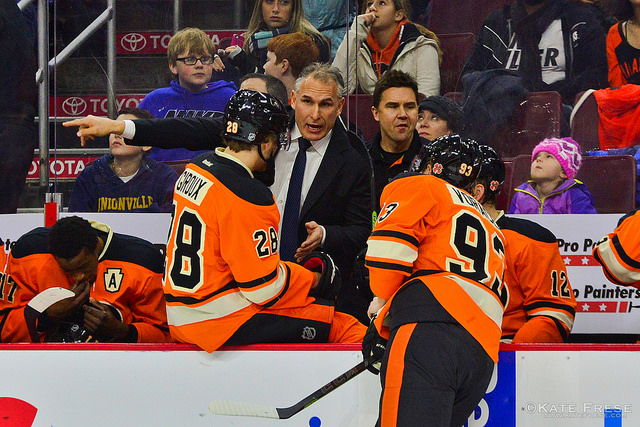 Getting rid of a coach often times is a scapegoat move. Ask the coach who faced the Flyers on Saturday.

It was the reason I was so against the Flyers making a coaching change as things got bad during late November. That was on the players, not the coach.

But Monday's loss was the final straw for me with Craig Berube and his "attack mentality."

Berube was ripping into players left and right at practice on Sunday about shooting the puck more. There is one problem with telling your players to constantly shoot - it sometimes leads to ill-advised shots.

The Flyers didn't take any shots that led directly to goals against in Monday's loss. But they had two power-play chances go by the wayside and a lot of the inconsistency there has been shots that go wide and can't be held in the zone or blocked shots that bounce out to center ice.

Shooting the puck is all well and good. There are many games where the Flyers could be easily criticized for passing the puck too much when chances are present.

Now the Flyers are not only not making the extra passes - which did set up good chances for offense - but there are moments where they seem to heed Berube's words and shoot at will and others where they are completely hesitant with the puck.

If not for the lack of discipline and penalty kill struggles, the Flyers could have easily won the Nashville game and at least earned a point out of the Arizona game.

Obviously, games can not be replayed. But, to me, one of the key factors to the Flyers sloppy game against a lowly Arizona team is Berube's philosphy of "attack mentality" getting in their heads.

Arizona is not a good defensive team. All the evidence you need there is in the fact that they nearly blew a three-goal lead in eight minutes. But it took the Flyers that long to get something figured out against the Coyotes defense.

Arizona came out physical. They got in the shooting lanes. And the Flyers didn't make adjustments until the final 10 minutes of the game.

Berube may have been at the center of the Flyers 2013-14 turnaround, but his constant need to push the "attack mentality" and shooting is hurting the Flyers season.

The Flyers won the first three games of the road trip by bringing physical presence and energy. In some senses, that is an attack mentality. But attacking is much more than just shooting, and that seems to be Berube's primary focus. And it can't take over practices the way it did on Sunday.

The Flyers best lines on Monday were the third and fourth line. The last thing players like Claude Giroux and Jake Voracek need to be told is to shoot more. They know the time and place to make those decisions and defenses can't cover both at all times. The desperate need for the Flyers to keep shooting is hurting the overall team play.

Shots can't be the first thing on the minds of these players. It has to be energy, playing physical, creating opportunities by shutting down defenses.

This team has the talent to win the next three games. Their determination is what is at question.

This is the Flyers chance to keep their playoff chances alive. If the Flyers can't get points in each of the next three games, perhaps it's time to address the problem with this team in other ways.

Yes, they need a lot of help on defense and there are pieces to the offense that could use work as well. But perhaps what they may really need is to rid themselves of the "attack mentality" of Berube.

The season still is not halfway over. And before it hits that point, the Flyers may need to make an important decision regarding the leader behind the bench. If the next three games go anything like they did in Arizona, Berube's seat should heat up.